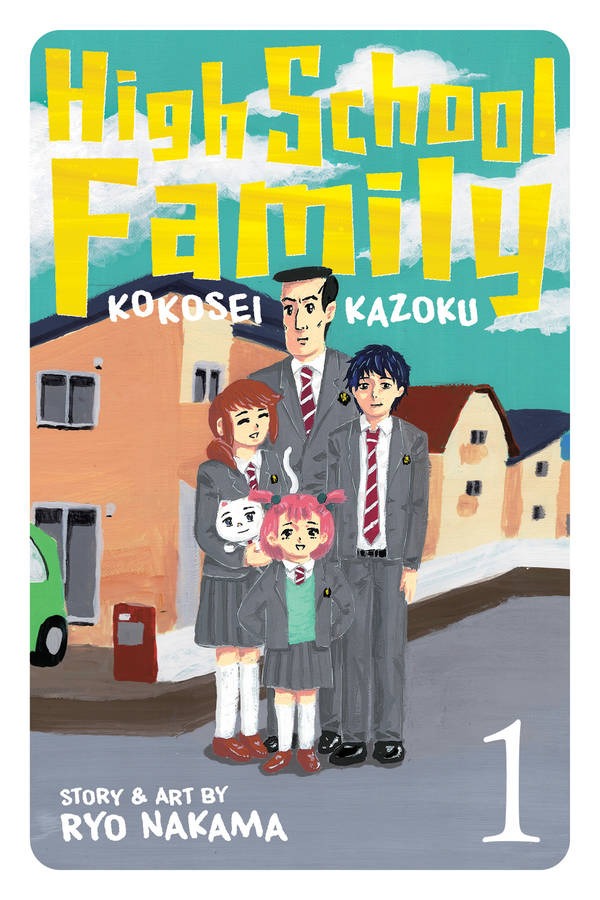 In High School Family: Kokosei Kazoku, 15-year-old Kotaro is excited about his first day of high school. His friends from middle school aren’t going to his high school, but he still feels confident and like it’s going to be some great years. Then Kotaro’s father announces that he’s starting high school, too.

But there’s more! Kotaro’s mom, who only ever graduated middle school, is also starting high school today. So is his 8-year-old sister, who passed the entrance exam with flying colors. And to top it all off, their cat Gomez is going to high school, complete with the school’s uniform.

The students have mixed-feelings about non-high schoolers becoming high schoolers, but mostly they warm up to Kotaro’s family. Kotaro, like a lot of teenagers, is humiliated having his family around him at school, and the manga runs with this premise. The whole idea is absurd, but that’s what makes manga like this work. It revels in the absurdity and is quite charming and amusing with its humor. Likewise, the characters are all delightful and relatable.

The first volume doesn’t have a strong plot, and instead concentrates on slice-of-life adventures as the family adjusts to going to high school together. This includes solving the problem of the cat using the principal’s office as a litter box, and helping the dad figure out high school level math. The manga has a thing for toilet humor, but it never gets over-the-top or gross with it. It’s not clear where the series will go from here, and the first volume sets up the characters and situation with heart and silliness. This is a fun, lighthearted read for someone who wants a zany story about high school with a twist.