If you’ve been watching Aoi Hono, the TV show about manga author Kazuhiko Shimamoto’s college days, you might remember a scene in which Hideaki Anno, future anime director and creator of Neon Genesis Evangelion, draws an incredibly detailed piece of animation on a few sheets of paper in his college classroom.

Fictionalized TV show though it may be, Aoi Hono’s representation of Anno as an animation-obsessed, extremely talented college kid isn’t far from the truth. Ever since high school, Anno was, and continues to be, obsessed with making animation and special effects films.

“I’m still basically doing the same thing I was back then,” said Anno to anime critic Ryusuke Hikawa on stage after a screening of his early amateur films at the Tokyo International Film Festival. 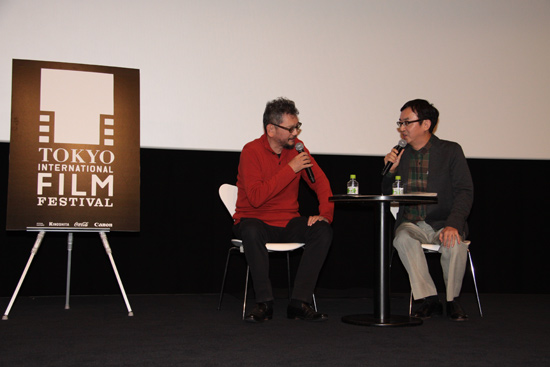 “How embarrassing. I want to go home,” said Anno after the lights went up at the screening. Still, once the talk began, it was clear Anno looks back fondly on his early works.

Anno started making animation back in high school in art club. With the minuscule budget of the club, Anno and his classmates were forced to draw and paint directly onto cels, which was much harder than drawing onto paper.

The art club then recorded their animation on 8-millimeter film, which he continued to use in college with his amateur film club, Daicon Film, which would later become Studio Gainax. Hiroyuki Yamaga, who later became president of Gainax, bought Daicon Film’s first 8mm camera with funds from his parents.

At this point in the talk, Anno paused, remarking, “there are some young people in the audience… I wonder if they know what we’re talking about,” and proceeded to explain exactly what film is. 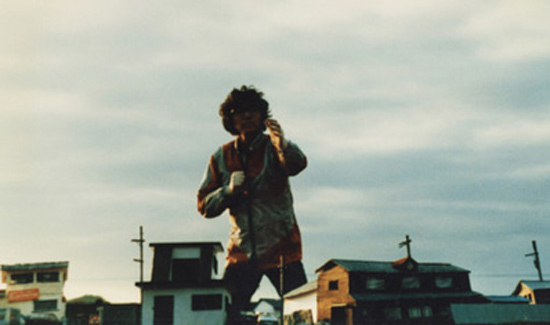 “Film is a great system,” said Anno. “Digital is a black box… you’re not sure what’s going on inside the camera, but with film, it’s really simple.”

One technique Anno employed in his live-action films was to cut the special effects – laser blasts and explosions – directly onto the film with a needle.

Anno, who went to high school and college in western Japan, once saved up enough money from his part-time job to take a trip to Tokyo where he attended the Private Animation Festival (PAF) and saw animated shorts filmed directly from paper, not cels. This was a huge influence on Anno, who proceeded to make his own flipbook shorts like the one presented in Aoi Hono.

Anno’s paper methods were also decidedly low-tech. Unable to afford a light box or peg bar, two important tools in hand-drawn animation, Anno instead killed two birds with one stone by buying the cheapest paper available at the 100 yen store. It was glued together at the top, requiring no peg bar, and was unusually thin and therefore see-though, eliminating the need for a light box. Anno did all the timing in his head.

“The first time I ever saw a timesheet was when I went to work on Macross,” he said. “I had no idea what a ‘timesheet’ was.”

Of course, the most fateful meeting for Anno and for anime fans in general came when he met the group that was to become Daicon Film. Daicon was created by now-legendary anime giants like Hiroyuki Yamaga, Takami Akai, Yasuhiro Takeda and Toshio Okada, who were looking for someone who could help animate their first project, the opening animation for the upcoming National Science-Fiction Convention. 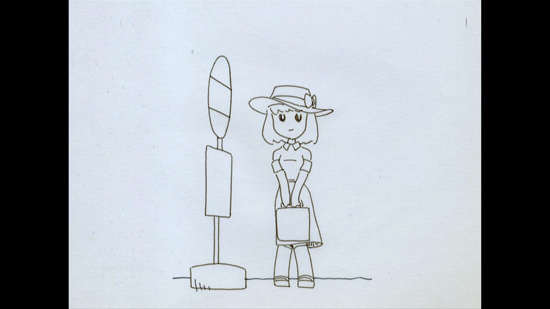 According to Anno, he was initially hesitant to join the project, but “Yamaga forced me to do it.” At the cafe where he first met the members, he drew a preview on some coasters.

The project, the now-legendary Daicon III, was animated by three people – Anno handled the mechanical stuff, while Akai animated the monsters and main character while Yamaga drew the backgrounds.

Again, professional cels were too expensive, so Anno bought huge sheets of cel-like material at wholesale and cut them himself, punching holes on top of each with a consumer hole punch and creating homemade peg bars.

Daicon Film went on to create the even more ambitious Daicon IV and several live-action special effects films. They then went pro with Royal Space Force, and the rest is history.

Anno and Hikawa veered from topic to topic, at times reveling in discussing minute details of their favorite series (when Anno is depressed, he watches the original Kamen Rider, apparently) but one theme that kept popping up was repetition. Anno mentioned while he could work longer hours when he was young, he feels he’s gotten a lot better since then.

“Watching these, I realize repetition is very important,” Anno said. “If you try the same thing again and again, you get better each time.”

A clue to the new Evangelion films, perhaps?