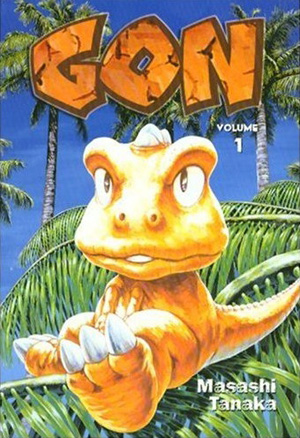 “Gon smash!”, “Gon chomp!” and “Gon hungry!” are about the only remotely feasible bits of dialogue I could imagine coming out of the vice-like mouth of that little orange dino, Gon. That’s precisely why I’m glad he never says anything in Masashi Tanaka‘s manga, which manages to paint a silent, but incredibly vivid picture of the world in which his meticulously crafted wildlife exists.

Gon is the last of the dinosaurs, and the manga follows him on the prowl throughout various situations—most of which involve eating—in the Tertiary Period. Believe me, the only reason I’m not going to make a dozen Denver The Last Dinosaur jokes is because no one would get them anymore. Instead, I’ll just marvel over a feat of storytelling rarely seen in the often overly verbose world of comics.

Tanaka breathes life into the simplest of ideas. It’s all there in the chapter titles: “Gon Eats and Sleeps,” “Gon Goes Hunting,” “Gon Builds a Mansion,” and “Gon Goes Flying.” In a handful of words you have all you need to know about the premise of each, but even those are largely unnecessary. Gon’s tales are so expressive they don’t even need sound effects. A bear roars, a hyena whimpers, golden eagles chirp for food, and Gon is right there buggin’ the hell out of all of them.

While almost any art style would suffice to get the sparse narrative across, Tanaka’s level of detail is in its own league. A lion blazes across an open field with the ever-abrasive Gon riding its back, gripping its mane and steering. Animals roll their eyes and grimace at Gon, but never appear like goofy caricatures. Tanaka’s skills are even further emphasized in action panels, which manage to convey fairly complex motions in full clarity, making Gon all the more readable.

Gon was originally serialized in Kodansha’s seinen anthology Weekly Morning from 1992-2002. I remember seeing the original North American volumes of Gon back when I was first really getting into manga. I flipped through them in the store, but didn’t pay too much mind to the little guy outside of his guest spots in Tekken. Don’t make that mistake with Kodansha Comics’ editions of Gon. It’s a fantastic series that’s suitable for readers of all ages, and is one of the best examples of purely visual storytelling out there.