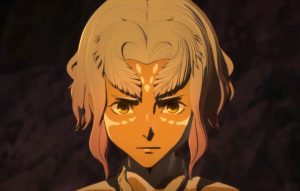 Godzilla: The Planet Eater will close out the Big G’s anime film trilogy when it hits theaters in Japan on November 9, followed by a streaming debut on Netflix. Kobun Shizuno and Hiroyuki Seshita direct the feature at Polygon Pictures, and a new trailer is here to tease the colossal battle between Godzilla and King Ghidorah.

Here’s how the official website describes the third film (via Crunchyroll):

The human race is on the brink of oblivion. The “wings of its demise” descend before its eyes. This is the concluding chapter of the animated feature film series, GODZILLA (aka “Anigoji”). 20,000 years into the future, the Earth is ruled by Godzilla. Pitted against him are the straggling remnants of the human race. The final chapter, GODZILLA：The Planet Eater, finds the Mechagodzilla city, the peak of scientific evolution and mankind’s best hope, burned to cinders. Godzilla Earth reigns supreme but he has one more challenge: the winged creature, KING GHIDORAH.