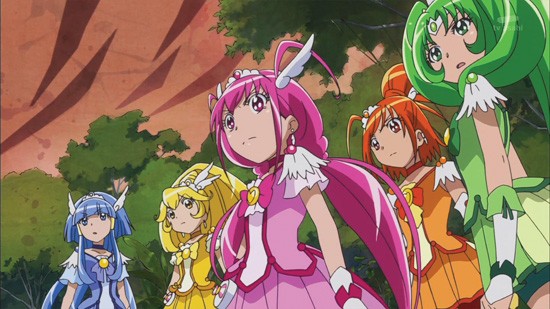 Anime for young children has seen its better days. Ever since the rise of Pokémon in the late 1990s carried a new wave of fans into the Internet age, the anime industry has largely set its sights on teenagers and young adults by catering to their desires for the more mature stories and fidelity to the original Japanese versions. In this environment, it seems unthinkable that someone would put out a dubbed anime series with “Americanized” character names, missing episodes, and an entirely new soundtrack, but that sort of cross-cultural recklessness is the name of the game for Haim Saban, aka Mr. Power Rangers. Saban recently partnered with Netflix to release Glitter Force, a heavily edited, English-language reversioning of the magical girl series Smile! Pretty Cure.

Pretty Cure (or “PreCure” as it’s often abbreviated) is a huge franchise in Japan, where it has been the dominant magical girl series for nearly a decade now. Like Gundam, it relies on a simple genre framework—a team of girls meets a magical familiar, dons multicolored costumes, and fights bad guys—to produce annual series that are just similar yet different enough to sell a new generation of toys and accessories to a new generation of kids. Smile! Pretty Cure (2012) is the ninth series since 2004’s Futari wa Pretty Cure. 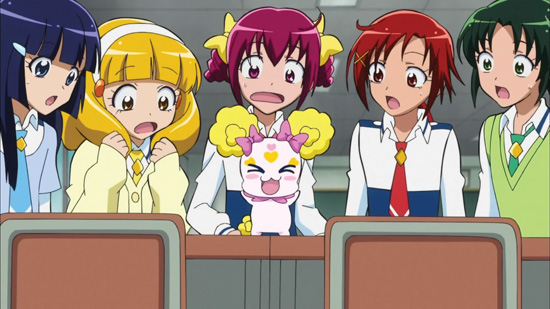 Glitter Force retains the basic story of Smile!, with five middle-school girls (each a different color-coded archetype, from the pink, bubbly airhead to the orange, hot-blooded tomboy) given magical powers and tasked with saving their world and the fairy kingdom of “Jubiland” from the denizens of the Shadow Realm. The theme this time around (there’s always a theme) is fairy tales; our hero Emily is obsessed with them, and all of the Shadow Realm’s villains are allusions to fairy tales: a wolf, a witch, and an oni (Japanese ogre).

Despite Pretty Cure’s status in the US as the purview of only the most hardcore adult fans, the series, like Sailor Moon and Cardcaptor Sakura before it, is targeted at young girls in Japan. (Although, to be fair, Japan has its own adult male PreCure fans.) It wouldn’t be inappropriate to call the franchise “Japan’s My Little Pony,” with all the stigma that the phrase carries. That said, Glitter Force is most assuredly not intended for the kind of person who reads a magazine with “otaku” in the title. 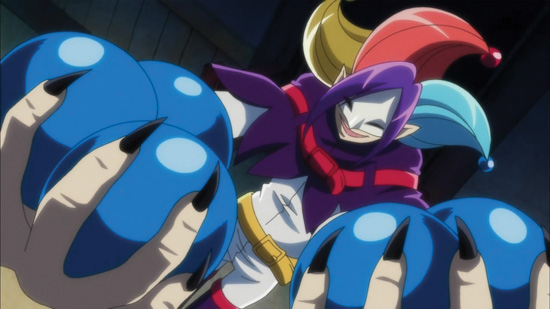 Appropriately, nearly all the evidence of PreCure’s Japanese roots has been wiped away in Saban’s adaptation, which replaces Japanese signs with crude English text, otherwise mundane dialogue with American pop culture references, and, of course, the original names with American ones. Our heroes Emily, Kelsey, Lily, April, and Chloe live in America (don’t let the chopsticks and school uniforms fool you), but when the animation obviously shows them on a trip to Kyoto, it’s hand-waved away as a trip to the (wait for it) “Asian-Pacific Expo.”

It’s easy to ridicule Glitter Force for its 1990s-era whitewashing, but the fact is that the series does exactly what it sets out to do, which is make PreCure palatable to mainstream American kids. The girls are lively and funny, and the conversational dub performances do an admirable job of selling their genuine friendship. Laura Bailey and Debi Derryberry bring a zany energy to both Emily and the fairy familiar Candy, and the script adds lots of contemporary slang like “epic win,” “besties,” and, yes, “selfies.” 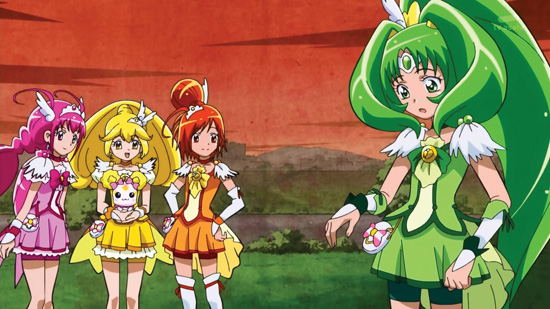 The dub is particularly interesting, because Glitter Force’s aggressive Americanization has seemingly freed up the actors and writers to be much more creative and natural with their scripts and performances. If you’re familiar with the visual conventions of anime, especially magical girl anime, you’ll instantly recognize the scenes in which the actors throw in extra off-screen dialogue that’s not in the original. This makes the dub considerably more talky and surprisingly funny, but sometimes undercuts serious scenes by muddling the melodrama with conspicuous attempts at comedy.

That drama doesn’t get started in earnest, however, until Episode 18. Smile! Pretty Cure runs for 48 episodes, but Glitter Force comes out to just 20—basically the first 24-episode season minus a few particularly Japanese episodes that Saban seemingly couldn’t sufficiently whitewash. Most of the series is spent in rote monster-of-the-week battles as the girls grapple with simple problems (“I lack confidence!” or “I didn’t buy a gift for Mother’s Day!”) or magical hijinks (in one episode they switch bodies, in another they turn invisible). The monster designs—each simply a mundane object that gets transformed into a clown monster called a “Buffoon”—are remarkably boring, and the girls’ combat styles are all slightly different versions of “shoot a laser.” 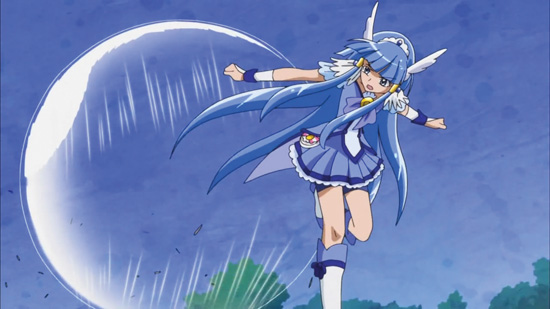 This probably works fine if you’re a kid who’s busy marveling at the lushly animated, three-minute magical girl transformation sequence, but it gets old fast when you’re an anime reviewer marathoning the series (hypothetically, of course). The final battle with the forces of the Shadow Realm, however, sees the girls splitting off into one-on-one bouts with the villains, which feature some really cool tactics and springy fight animation. Don’t expect high art, but in its finale, Glitter Force nails the simplistic heroics that make the best shonen action and magical girl shows tick.

So, should you watch Glitter Force? That depends. If you’re an anime fan looking for the next Madoka Magica, look elsewhere. If you’re an eight-year-old girl or the parent of one, this is probably the best introduction to anime in recent memory. Turn the relentless perfectionism of your anime fan brain off for a few episodes and you’ll start to see that putting an Americanized magical girl series targeted at kids on the most watched streaming service is one of the best things for the medium in years. Just as Attack on Titan provided a perfect gateway for teenagers and adults looking to try out Japanese animation, Glitter Force is poised to be the gateway for a whole new generation of anime fans. Sacrificing Pretty Cure at the altar of progress is a compromise I’m willing to make.