Ghost in the Shell Shorts Streamed 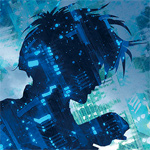 2014 marks both the 25th anniversary of the original Ghost in the Shell manga and the release of the third episode of Arise, the latest Ghost series, and the occasion is being marked with a host of projects.

The first of these special events, the border:less short films project, premiered in Tokyo this past week, and now the shorts are all available online.

The border:less project is a series of five short films by young directors set in or based around concepts from the Ghost in the Shell universe.

The project was manned by Katsuyuki Motohiro, the chief director of Psycho-Pass, a show that certainly owes a lot to Ghost in the Shell. Motohiro personally picked the directors for the project, most of whom are under 30 (about the same age as Ghost in the Shell itself!).

All of the shorts are worth a look, but for the Japanese-disinclined, we recommend “Foreseeing 2027,” a visual tour of Tokyo set in the future, and “Color,” about a woman with a cyberbrain who can’t trust her own vision.

Also planned to celebrate Ghost in the Shell’s 25th anniversary is an exhibition of original artworks later this year. We’ll be sure to provide an update once more is known.