To promote the upcoming live-action version of Fullmetal Alchemist, fans in Tokyo were provided with some special treats in celebration of this new development for one of the most beloved manga and anime series of the 2000s. 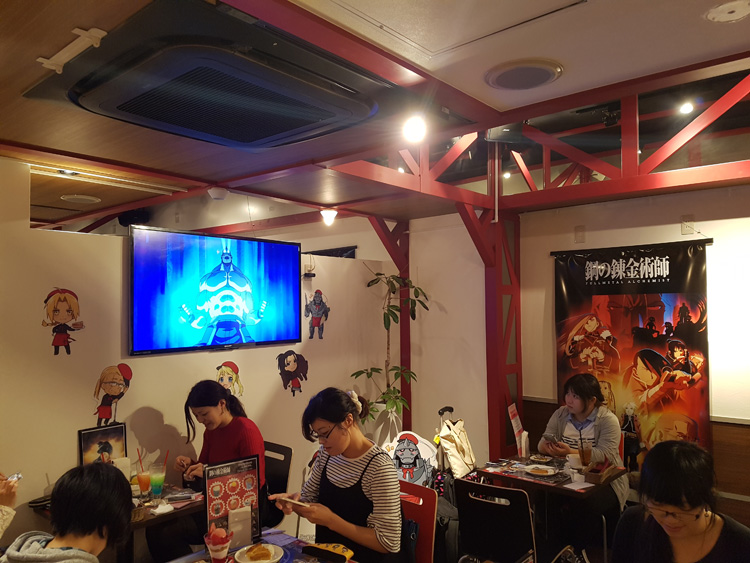 Though the name of the establishment might make you question the legitimacy of this collaboration, the quality of cafe itself was surprisingly satisfactory. The interior was relatively spacious and well decorated, and the menu boasted a variety of adorable themed foods such as a classic Japanese omelette rice with the signature Flamel Cross written out in ketchup, and a Philosopher’s Stone parfait. Other items included dishes that appeared in the anime like the favored stew of the Elric brothers and Winry’s apple pie. 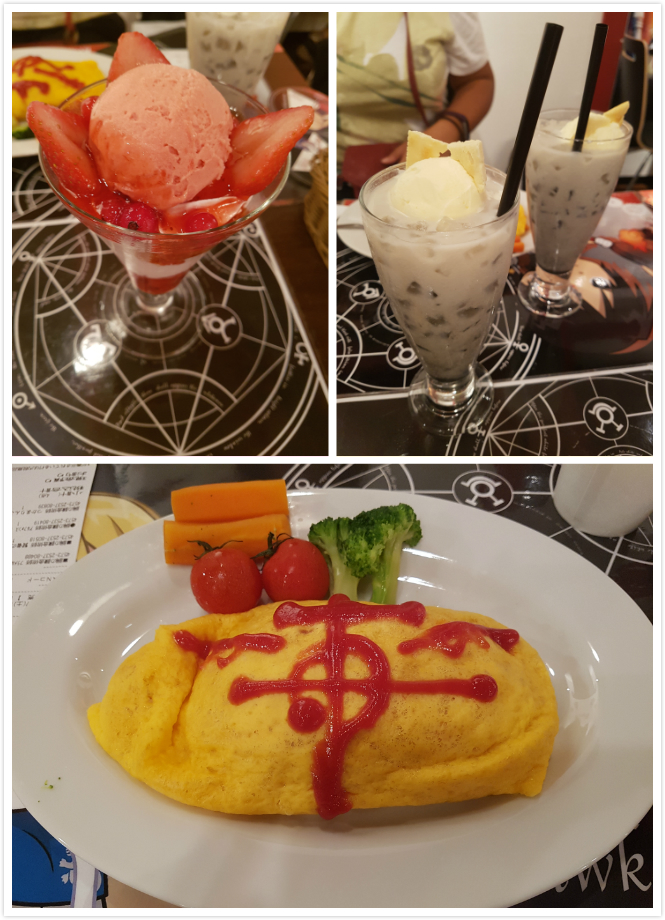 Perhaps the most alluring aspect were the character illustrations that were created specifically for this cafe. The 24 fresh-out-of-the-oven designs featured well-known and beloved characters like Edward and Alphonse as well as sub-characters like Yoki and Maria Ross. This line-up catered perfectly to the diversity of the FMA fan base and was turned into merchandise such as acrylic charms and tin badges. 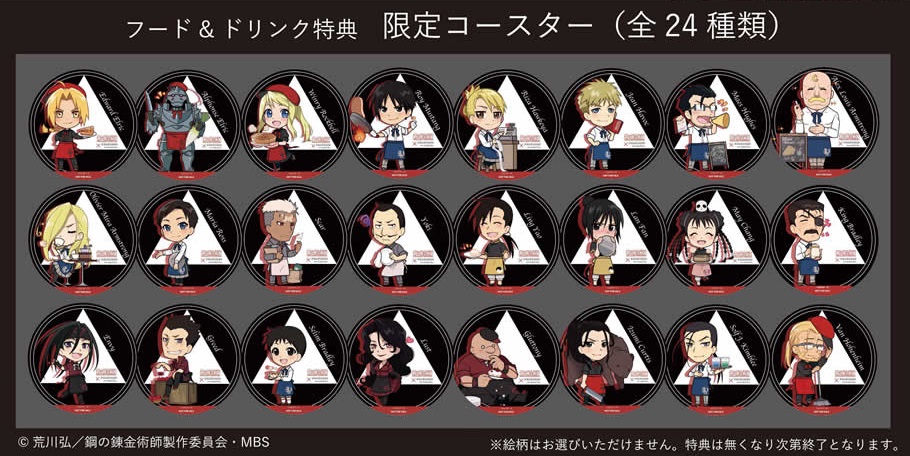 This cafe opened around the country, beginning in Osaka and Nagoya then moving to Fukuoka and Tokyo.

From September 16 to October 29, the Fullmetal Alchemist Exhibition was held at Gallery AaMo near Tokyo Dome.

This exclusive exhibition showcased not only original artworks from the creator of FMA, Hiromu Arakawa, but also some personal props she used as reference when drawing the manga. Some whacky ones included shotguns, swords, and kunai-like blades that were used as reference for weapons held by characters like Captain Hughes and Mei. Photos were unfortunately not allowed in that section of the exhibit, but it did make you wonder where on earth a manga artist from rural Hokkaido got her hands on shotguns and sniper rifles (replicas, we assume, but still…) 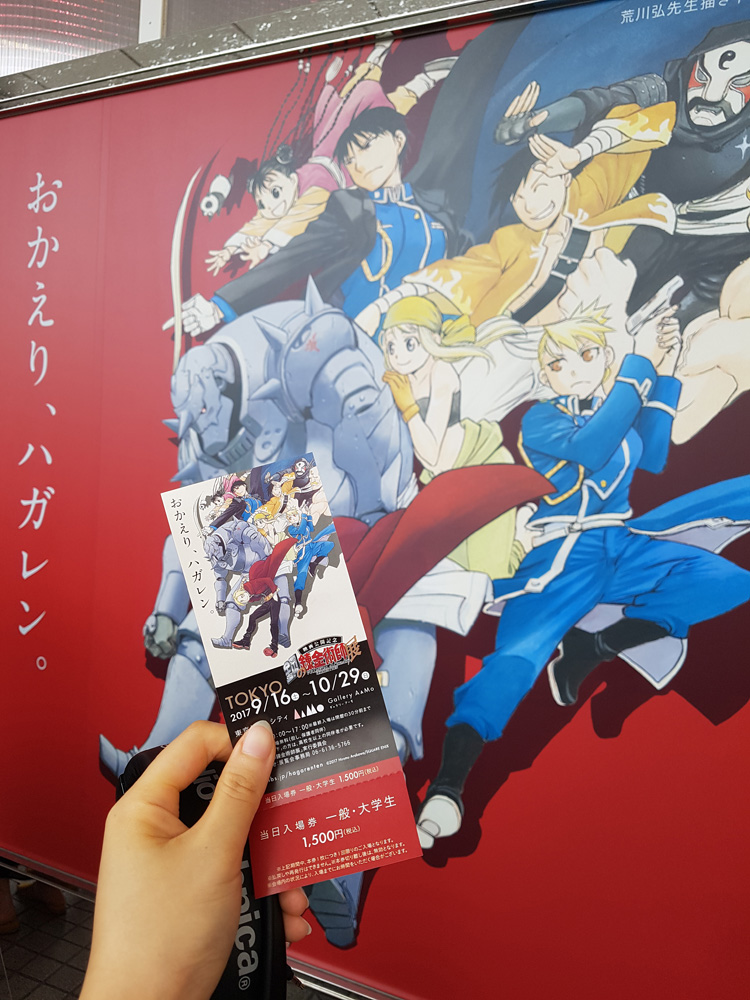 The exhibition also provided a voice guide (in Japanese, for an extra ¥600) featuring the voices of Romi Park (Edward) and Rie Kugimiya (Alphonse) that guided you through the different display sections and provided you with some behind-the-scenes stories about some of the displays.

Since the anime itself has long been over, it was quite nostalgic to hear the voices of the Elric brothers again. The end of the exhibit featured a special code (the four digits of the date carved into Edward’s pocket watch) to hear a special track with the voice actresses speaking as both the characters and themselves. 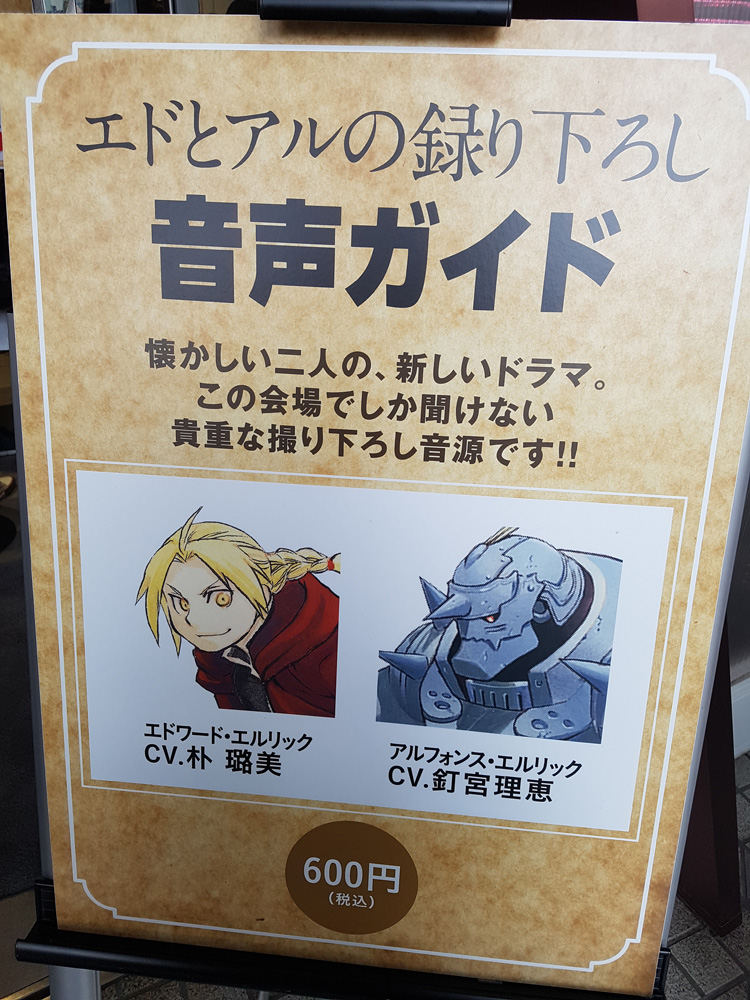 As the line proceeded into the exhibit building, the line wrapped around a life-sized Alphonse armor statue that you were free to take photos of and with. Though you only got a brief window to look at it up close, the sheer craftsmanship and attention to detail that went into this piece of artwork made the exhibition worth it alone. They even put in lights behind the eye sockets of the armor instead of just painting it in to give it a life-like feel. The only other thing they could have done to make this perfect was if they’d had Kugimiya’s voice come out of the jaw piece.

One of the most intense sections featured in the exhibit was of the final battle between Edward and the “father” of the Homunculi. Not only was the scene shown in full color on a giant display board, but the voice guide commentaries, combined with the full original manga pages, gave me goosebumps. 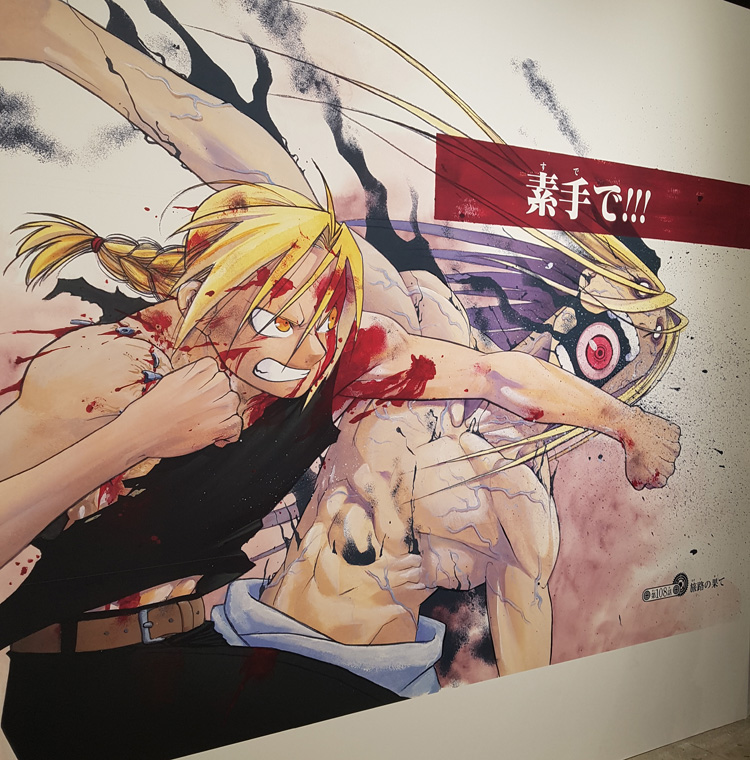 Finally, as you exited the exhibit, the actual costumes and mechanical arm used in the live-action film were set up as a final treat for visitors, as well as to entice fans to go see the movie.

The film is scheduled for release on December 1 in Japan, but a premiere showing has already taken place at the Tokyo International Film Festival, and another screening will be held at the Anime NYC on November 19. So far, the response for the film as been quite mixed, and fans will have to wait another month before they can judge for themselves whether this live-action film will live up to the legacy of this beloved manga and anime. 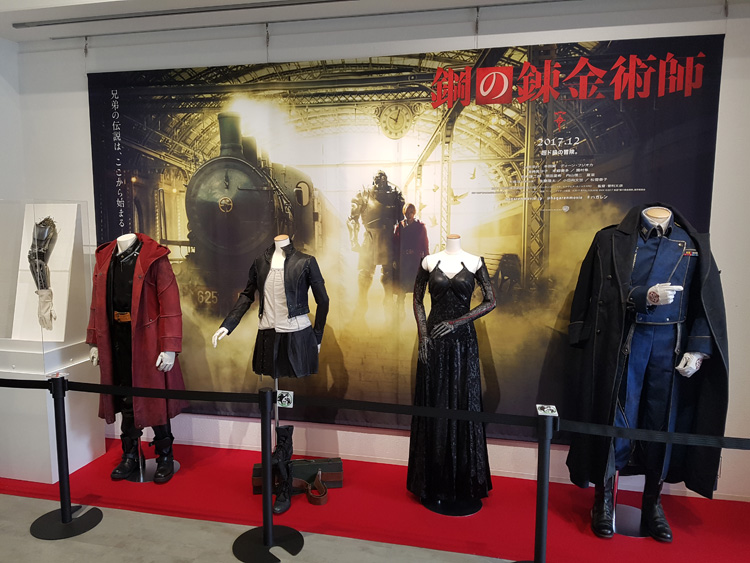 Annie Zhong is a Tokyo-based anime enthusiast with 20+ years of otaku history. She is dedicated to worshiping Pikachu.