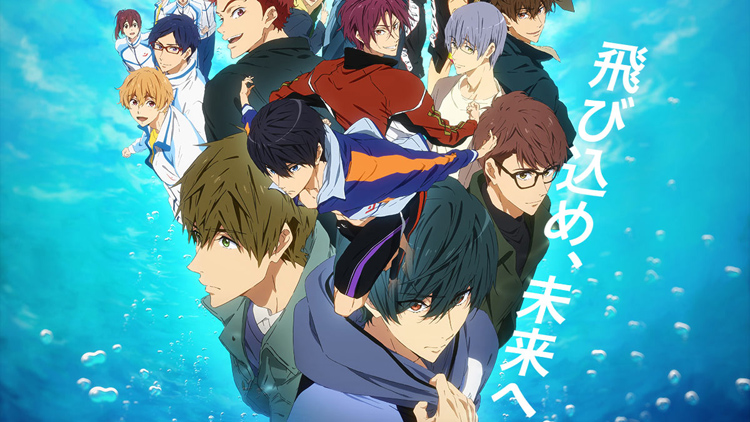 Ever since the release of the movie Free! Take Your Marks and the announcement of the new season last October, fans have been on the edge of their starting blocks waiting for the upcoming Free!-Dive to the Future-, set to hit screens July 11.

In response to this fervent fan anticipation, it was announced in February that a special viewing event would take place on June 23. 7,500 lucky fans would get an early look of the first episode of the new season, plus a special unaired episode that takes place just before the beginning of new season. 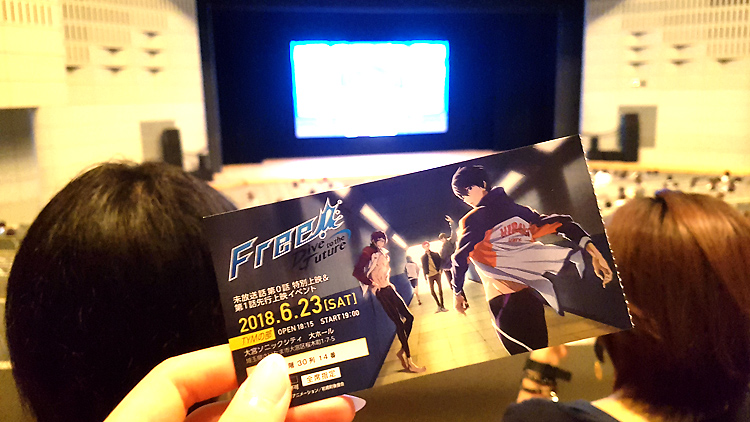 The event was divided into three viewing sessions, one for each of the movies released leading up to this sequel: Free! -Timeless Medley- Kizuna (Bonds), Free! -Timeless Medley- Yakusoku (Promise) and Free! Take Your Marks. Each movie was played before its respective viewing session with a short 15 minute interval before the much anticipated special and first episode of the new season.

For those who would like to wait until the official release on July 11, a few quick, spoiler-free impressions:

Fans can rest assured that if the special episode and first episode are any indication, the new season will live up to the high expectations. -Dive to the Future- looks like it will be one of those rare sequels that takes the whole story to an even greater heights (or even further depths, as it were) and gives fans more reasons to be rightfully and proudly obsessed.

For everyone else, prepare to dive into a spoiler-heavy sneak peak of the newest Free! story!

The special unaired episode, “Soushun no Birudoappu” (“Early Spring Buildup”), begins with our two main characters, Haruka Nanase and Makoto Tachibana. Both of them have settled into their new apartments in Tokyo. The episode begins with Makoto calling Haruka arranging to meet each other in the evening at a suit store where they’d purchased their university entrance ceremony outfits.

Makoto leaves first to look for toys his younger siblings have been asking for. While on his search, he bumps into members of his home town council who are in Tokyo to participate in a mascot sumo wrestling competition with their own town mascot, Iwatobi-chan. The council is desperately searching for the lost beak of the Iwatobi-chan costume, as well as someone to fill in for the first match, as the person who was supposed to play Iwatobi-chan is caught in a train delay.

Makoto is dragged into the event building by the council people and is seen by Seijuro Mikoshiba, the captain of Samezuka Academy in season one, who is now in his second year of university in Tokyo. Haruka is also walking around town when he stumbles upon the missing Iwatobi-chan beak and becomes determined to return it to its rightful place. He meets Seijuro, who is also searching for a toy for his younger brother, Momotaro, in front of a small toy store, and learns of Makoto’s whereabouts. He heads to the event, making it just in time to return Iwatobi-chan’s beak and join the pep squad to cheer Makoto (Iwatobi-chan) on. 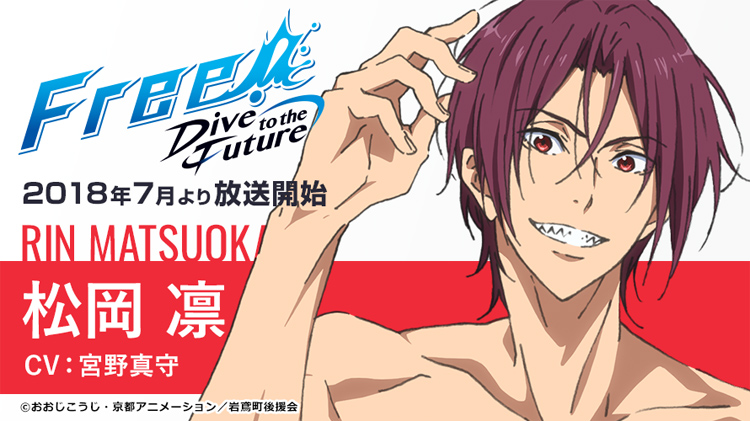 Meanwhile, back in Iwatobi, Nagisa Hazuki, Rei Ryugazaki and Gou Matsuoka are attending a local festival with Aiichiro Nitori, Momotaro Mikoshiba, Sosuke Yamazaki and other members of the Samezuka swim club.

They come across live streaming coverage of the mascot sumo wrestling competition, where Gou recognizes Makoto by the shape of his leg muscles, and Nagisa spots Haruka wearing an Iwatobi-chan hat in the background. They cheer in joy as Makoto makes use of his powerful back strokes and turn jump to defeat the opposing mascot. They call Makoto to offer their praise and congratulations, leaving Makoto flustered. Haruka eases his distress by giving him the toys he was looking for for his siblings, and they finally head off to the store to try out their new suits.

Many other characters such as Rin Matsuoka, Kisumi Shigino, Asahi Shiina, Ikuya Kirishima, Hiyori Tono, Natsuya Kirishima, and Nao Serizawa also make small appearances here and there. While they’re not heavily involved in the main plot of this special episode, we get to see nice little updates of where each of them are at this part of the story. 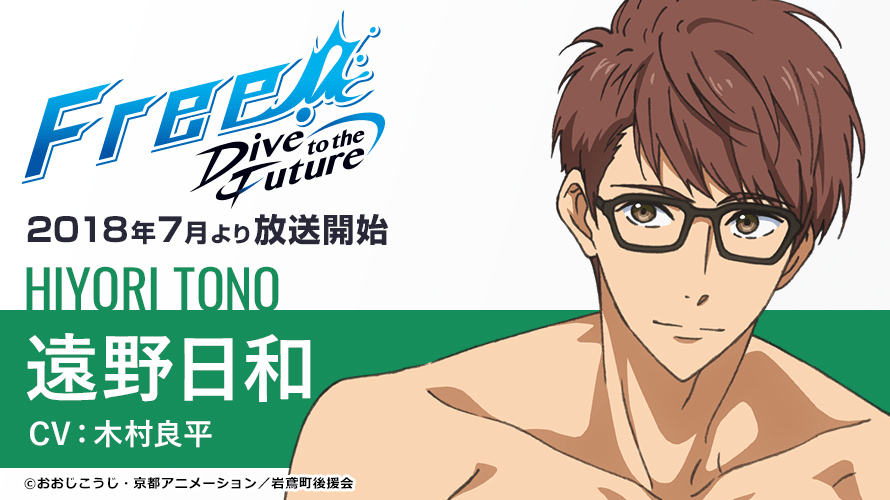 From there, the story continues to the first official episode of season three, Mebuki No Daibusutaato (“Budding Dive Start”), where we begin with a familiar scene of water and Haruka’s narration of the water as a living being.

He is seen swimming in the pool near his apartment and contemplating his thoughts from the first episode of season one: “A prodigy at 10, a genius at 15, and an ordinary person once you’re past 20.” He ponders whether he still wants to become an ordinary person as Makoto comes to the side of the pool and offers his hand to pull Haruka out. Haruka takes his hand, but instead pulls him into the water for his insistence of adding the “chan” suffix to his name.

They then head off to begin their first day at their respective universities. On his way to swim club practice, Haruka is stopped by Asahi Shiina, one of his middle school swim club teammates from High Speed! -Free! Starting Days-, who is also attending the same university and the same swim club. 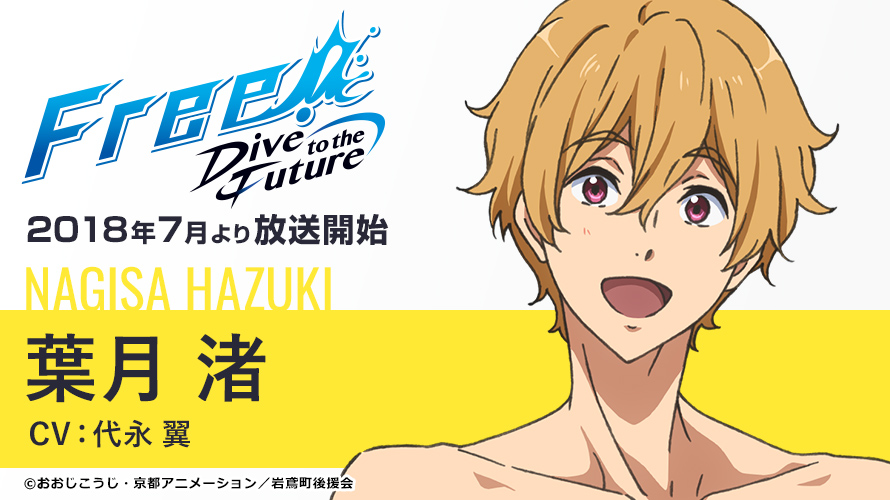 As newbies, they are tasked to swim one lap in their strongest style as a self-introduction. Meanwhile, Rin is seen practicing in Australia when his coach introduces him to an mysterious blonde man. Haruka and Rin are shown swimming as if they’re right next to each other, and even seem to be reminiscing about each other’s presence as they finish their lap and look to the empty lane beside themselves.

The scene then cuts to the locker room at Haruka’s university, where he and Asahi learn about the upcoming freshmen competition, which will be the first step to being selected as a representative for the national team.

After swim club practice, they meet up with Kisumi, who is also in the same university but on the basketball team, and attempt to prank call Makoto, who is shocked but delighted to hear about Asahi.

They head over to Asahi’s sister’s cafe for a small reunion and take a trip down memory lane with an old photo album. They come across a picture of their middle school swim team and are reminded of Ikuya, whom they haven’t heard from or about since his departure to America.

With hopes of seeing him again someday, the freshmen competition begins with Haruka and Asahi competing beside each other and Makoto and Kisumi cheering from the stands. Asahi reminds Haruka of the promise he made in middle school to best him one day, but that day was unfortunately not this day. As the two of them walk down a corridor shortly after the match, a short-haired figure passes by. Haruka immediately recognizes him as Ikuya. The shock in his voice resonates as the episode comes to an end.

As these are just summaries of some of the highlights and overall plot for these two episodes, but there are still plenty of adorable little moments in each to look forward to when they air next month. I can guarantee that this new season promises to be another spectacular, tear-inducing story of friendship, rivalry, and the unbreakable bonds between these adolescents. 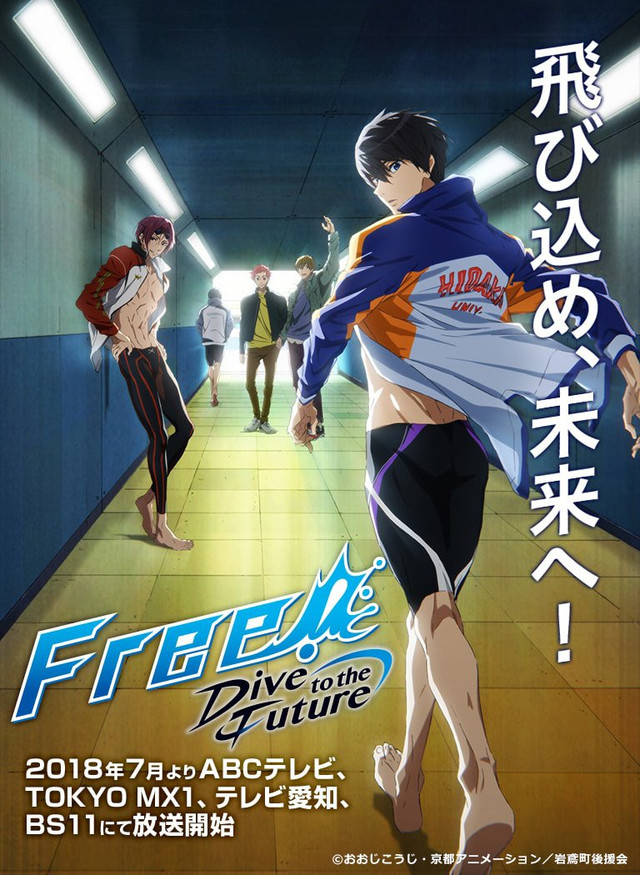 Annie Zhong is a Tokyo-based anime enthusiast with 20+ years of otaku history. 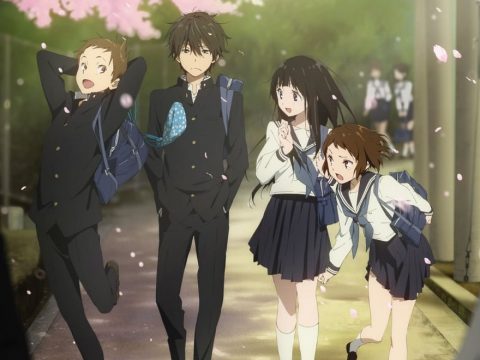