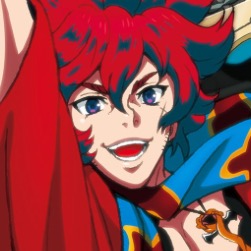 Imagine if Footloose took place in 19th century Japan, where all rock music is outlawed except for Heaven’s Songs propaganda music performed by top government-approved idols. Doesn’t sound like the best place for someone to aspire to be a famous rock star, does it? Nevertheless, that’s exactly what Ryoma Sakamoto aims to be in Samurai Jam -Bakumatsu Rock-, now available in

Illegally-owned guitar? Check. Jukebox Hero dreams? Double-check. Now all Ryoma needs is a group of like-minded rockers, and that’s precisely how his Banned in the Shinsengumi quest begins. Next thing he knows he’s got fellow rebellious rowdies Kogoro and Shinsaku on board, proving that even the most determined of musicians can benefit from having more than “just one guitar!”

Bakumatsu Rock started out as a PSP adventure/rhythm game by Marvelous AQL before being adapted into a manga series and the 12-episode anime at hand. Itsuro Kawasaki (Shining Hearts, Rental Magica) directs, with Mitsutaka Hirota (The Prince of Tennis II, Phantasy Star Online 2: The Animation) handling series composition for the Studio DEEN production.

Those who prefer their period pieces to be spiced up with a whole lot of style and rock ‘n roll energy will definitely want to line up before the first band goes on stage. With all 12 episodes along with clean versions of the opening and closing animation,

is one act you won’t want to miss.