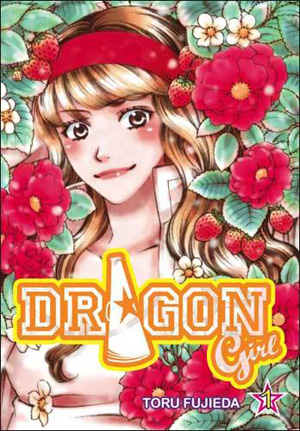 Shoryu Senior High used to be for male students only, but it’s recently become co-ed. Rinna takes advantage of this and is thrilled to be going to the same school her father went to. In fact, he was the “legendary” captain of the cheering squad and Rinna dreams that she can have the same title. Right away she says she wants to join the cheering squad… and she’s told girls aren’t allowed.

Of course she blows up. This could very easily turn into a girl-power story, with a heroine fighting against the odds and coming out on top. But, actually, it doesn’t turn out that way. I mean, throughout the book Rinna does fight against various odds, but they’re mostly not based on sex or gender. So the “girl-power” feel of the book only shows up in the beginning and quickly goes away. Alas.

She does end up getting on the cheering squad, despite the initial sexist rejection. And then, though this is really a book about cheering, the storyline mostly takes place around the things that prevent her, and the squad, from being able to cheer. If anyone is more into cheering than Rinna, it’s Hasekura, the mustached captain who also idolizes Rinna’s father. Hasekura is obsessed and over-the-top, more so than other characters. There’s a part where he has to dress in drag (so another girl won’t be nervous about boys—yes, that’s really what happens) and he seems the most upset by the fact he has to cover up his precious mustache. Rinna’s biggest quirk is probably the obsession with her father, which is referred to in the manga as a “daddy complex.” Actually, judging by the way she gets nosebleeds over him, I’d say “Electra complex” would be more specific.

Dragon Girl has several storylines going on as it moves. Sometimes cheering almost feels like a background thing. Yen Press is publishing it in omnibus format, so this first volume is technically the first three volumes and it’s about 500 pages long. It feels aimed at a primarily female audience, and though it has attractive art, it’s not florid or overly beautiful like some shojo titles.  Compared to the flowery motifs you see in some, Dragon Girl almost feels bare. That could be a good or bad thing, depending on your taste in art. While obstacles do get in Rinna’s way, it’s not really dramatic, but more of a light, easy read.