Diabolik Lovers Offers a Brood of Gorgeous Yet Sadistic Vampires 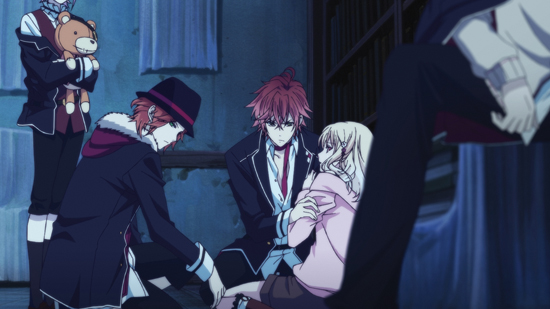 What if you woke up to a brood of gorgeous yet sadistic vampires? Would you scream or cry? Would you make a hasty retreat? Or would you give into the ultimate fantasy of succumbing to supernatural predators who wish to use you only as a human juicebox? Welcome to the world of Diabolik Lovers. It’s conventionally sexist, heavily reliant on tropes that glamorize rape and female submission, and its narrative is tired and lackluster. And yet, it’s a decadent guilty pleasure that will almost certainly end up entrancing you with its eerie, dreamlike nature, much like a vampire’s “glamour.”

The anime adaptation of Diabolik Lovers follows a wisp of a girl, Komori Yui, who has suddenly and inexplicably been forced to move to a new town and a new home—a new home full of vampires. No kidding, an entire house inhabited by six bishonen vampires. From the very onset of the show, Yui is basically a simpering idiot, though she’s understandably confused about why her “father” would send her to live in a house of sexually aggressive bloodsuckers. One by one they pounce on her, claiming her, pinning her to the sofa, licking her neck, and bestowing humiliating nicknames upon her to further dehumanize her. They descend out of the dark, ravenous and thirsty for her delicious, sweet blood. No matter what happens, they say, she belongs to them. She has no choice.

Yui does bat them away, playing up the damsel in distress role, and she tries to run away to the best of her ability, but she never truly fights her aggressors. She could attempt to leave the house when she has a chance, but she does not. Even as the second episode continues on and hotheaded Ayato Sakamaki forces Yui to let him drink her blood in class at their night school, Yui seems powerless. It’s as if she believes there’s no escape for her. Or maybe she’s that trusting. Maybe she’s that stupid. 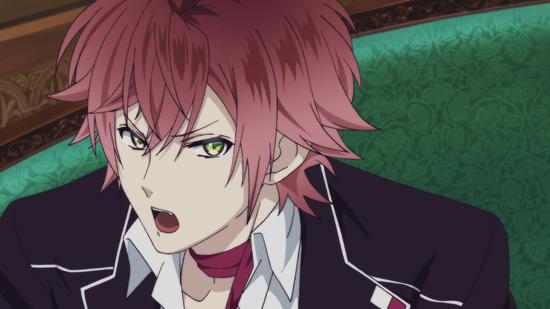 The Blood Is Love

The tale of the completely submissive Yui is one that needs some time in the incubator, as you watch her arrive at the vampire household, quickly become a human blood bank for the insatiable bishonen vamps who live there, and ask incessant questions about her father and why he would send her to live there.

Part of the fun of Diabolik Lovers is watching for Yui to react in some way. You want to also want to see if she can break out of this role and, despite the fact that I know she will end up with one of these vampire suitors, turn the tables on her aggressors.

The weirdness and the predatory vampires make for some genuinely intriguing drama, no matter your “normal” anime viewing habits. You may not be able to understand what Yui is thinking, but watching her consistently seem to give in and make the choices you’d never make is almost like viewing some sort of sick power fantasy. You watch Yui and feel secure in the knowledge that you’d never make those decisions. You know that you would never fall victim to the same juvenile games the vampires play. It becomes simple to devour the episodes while repeating the mantra, “I’m better than this. I’ll never be like this.”

As the series wears on, you’ll find yourself asking, “Will Yui snap out of being a pathetic vampire treat?” If not, then so what? At least you’ll know how not to behave if you ever find yourself surrounded by six pretty boy vampires. Just get some holy water and some weapons and whip them into shape, Belmont-style. 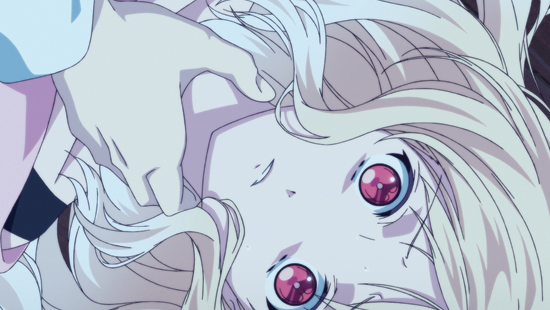 You Can’t Quit Me, Baby

The various degrees of abuse the vamps heap on Yui as well as some sick humor will keep potential Diabolik Lovers viewers intrigued, as well as the mystery surrounding a journal kept in the “library” portion of the vamp house. What was up with Yui’s father? And why do all the vamps hate themselves and life?

The first two episodes of Diabolik Lovers are enough to convince viewers that every vampire in the house is some sort of bizarre predator with violent mood swings. The vamps fly off the handle at the smallest thing. Every friendly advance from Yui ends in her being subdued and drained of blood. There’s no rhyme or reason for it. Kanato, the youngest of the brood, is just as creepy and unnerving as a doll, and it seems most of the vampires have had their turn with Yui at least once.

She tries to get away once, running to a phone booth of all places, but that’s a short-lived victory. It’s a macabre dance, watching her willingly surrender to their abuse time and time again, thinking these bloodsucking freaks are actually “nice guys” beneath their nasty veneers. Honey, none of them are. And even if they suddenly warm to you, that doesn’t change the fact that they’ve all consumed your blood—they’ve pierced your skin with their fangs and siphoned your lifeforce—against your will. But hey, whatever, by all means keep running around trying to indirectly “get to know” them. 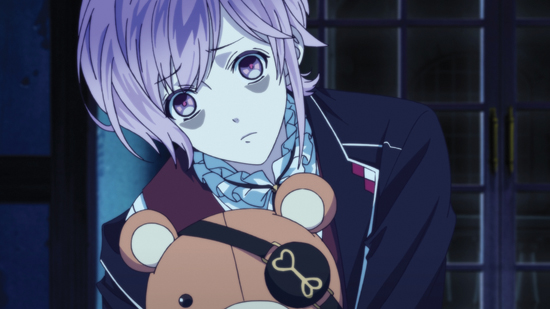 A Song for the Dead

Diabolik Lovers is enchanting in its own ways, though you’ll want to keep in mind when deciding to sit down and view all the episodes that the anime series is only a smaller part of the larger collective. This is a media franchise with several connecting pieces and additional fictional works that serve to further flesh out the spellbinding tale of a vampire brood and a girl who happens to find herself smack dab in the middle of things. 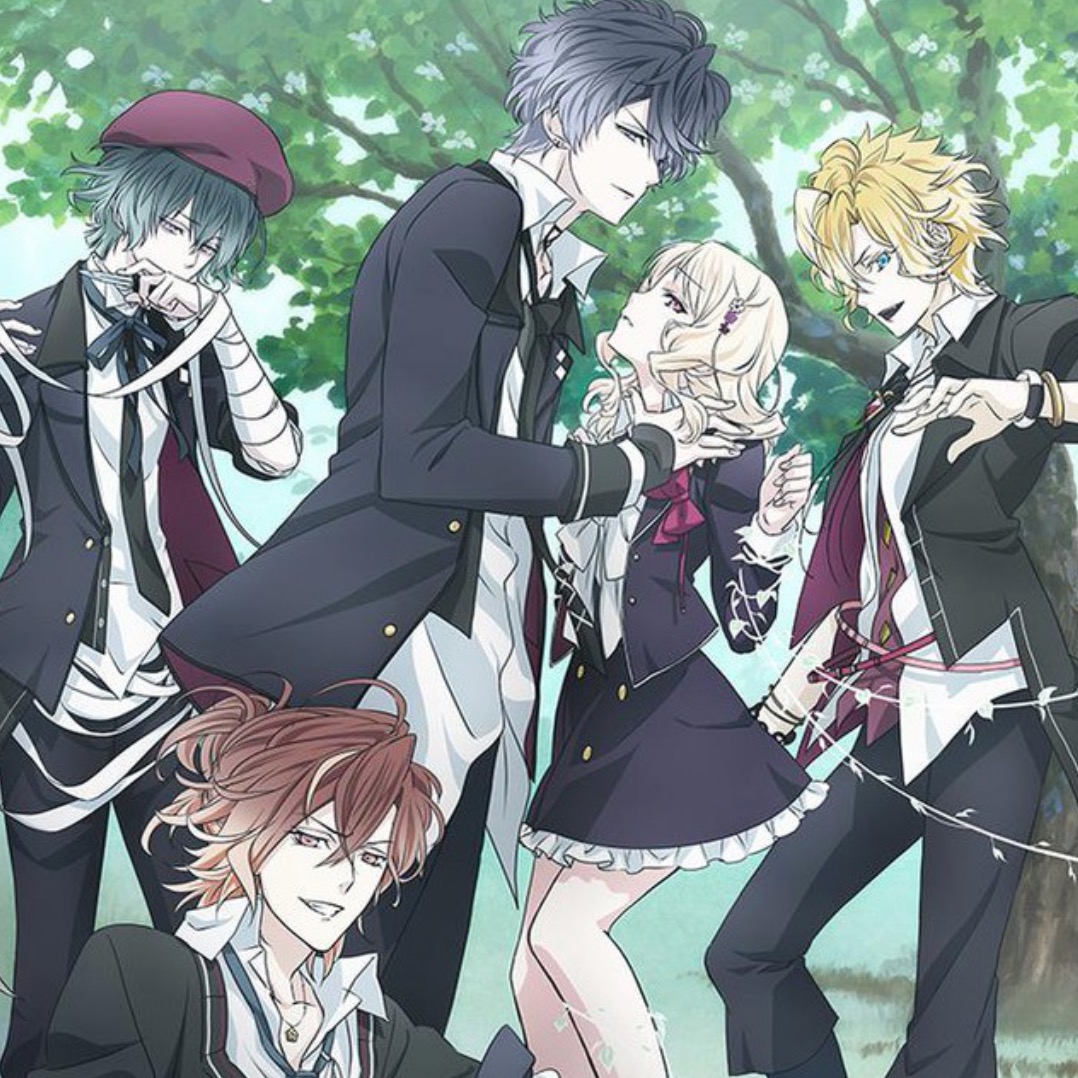 Diabolik Lovers Season 2 Premiere Date Set
Anime returns on September 23
The time has been set for the return of the Diabolik Lovers anime, based on the drama CD and PSP game project of the same name… Vampire Anime: They (Mostly) Bite and Suck
Japan’s stranger affair with the frilly and fanged
From the young adult section of your local bookstore to every other show on The CW and the recent release of the latest movie installment of the Twilight “Saga”… 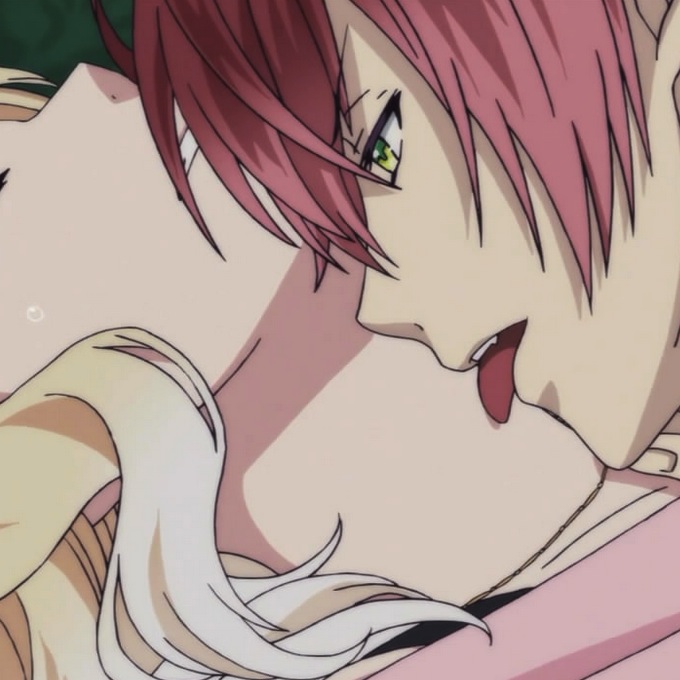 Anime Review: Diabolik Lovers
You and me could write a bad romance
Diabolik Lovers is an anime adaptation of an otome visual novel franchise, and the way one approaches this title could have a real effect on how one ends up…