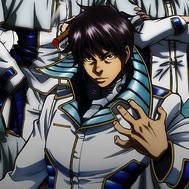 One of this season’s hotly anticipated series is Terra Formars, based on the manga written by Yu Sasuga and illustrated by Kenichi Tachibana. Crunchyroll announced plans to stream the fall anime, with the action set to kick off on September 26 at 9:30am Pacific Time.

TERRAFORMARS makes its anime debut as a startling work of science fiction and adventure. With Earth becoming increasingly overpopulated, an ambitious plan has been put into place to terraform Mars using mold and cockroaches. Nearly 500 years after the plan, a mission to Mars, Annex 1, is under way to accomplish crucial research into the Virus currently plaguing mankind with the crew members who’ve been injected with various DNA of life on Earth in order to combat the Terraformars, giant humanoid cockroaches.

Animation production will be by relatively new studio LIDEN FILMS, also known for their previous work on AIURA and Wooser’s Hand-to-Mouth Life. Voice actor Hidenobu Kiuchi, also known as Hei in Darker than Black, stars as Shokichi Komachi, Kaito Ishikawa, who also voiced Shunshin You in Ace of the Diamond, plays Marcos, Shizuka Ito, known for her role as Boota in Gurren Lagann, is cast as Michelle, and Yoshimasa Hosoya, also known as Wave in Akame ga Kill!, plays Akari Hizamaru.