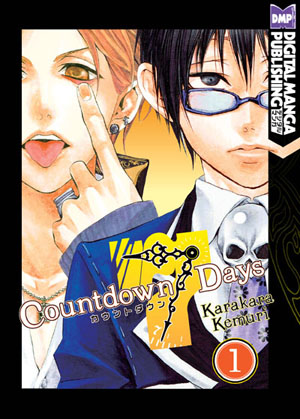 Mitamura is a special kind of teacher—he teaches dead people. In the afterlife, which is more accurately called Sheol (from the Hebrew), he teaches the newly dead what they need to know in order to be reincarnated. It’s an interesting job. It’s just too bad he’s a jerk.

He certainly has no sense of when to hold his tongue and not say something mean. Or how to treat people and animals well. He goes to the living world with one of his students, and she takes off. As the manga moves along, her reasoning for this flight is explained. Mitamura needs to find her in seven days, or he’ll be fired and vanish from all existence. And if the girl isn’t brought back to the afterlife right away, she’ll turn into a demon.

And then Hanasuke gets dragged into the situation. He’s a twenty-three-year-old who just died, and Mitamura needs to provide an explanation. Spirits can wander around Earth for seven days, at which point they’re sucked into the afterlife. Mitamura says that if Hanasuke helps him find the missing girl, he can help him get his old life back. Which is a lie, but Hanasuke believes it. He’ll do whatever he can to be alive again.

Although the manga is called COUNTDOWN 7 DAYS, the whole thing of finding the girl is only part of it. After that, the story takes us into Sheol, and we get to see what happens in the afterlife and what their classrooms are like. People don’t even have to be reincarnated—they can also be guardian spirits, teachers or decide to be fully terminated. And, following that, there’s a stand-alone story about a guy who kills politicians that isn’t as strong as the main story.

This manga is by Kemuri Karakara, the same mangaka behind Replica, which was released at about the same time through Digital Manga Publishing. I thought Replica was mostly pretty run-of-the-mill, but I won’t say that about COUNTDOWN: 7 DAYS. I thought COUNTDOWN was imaginative, interesting and different, and enjoyed it quite a bit more than Replica. That’s not to say that I disliked Replica, but this one was fun and clever and I enjoyed the whole impending premise of it. I’ll be curious how this series plays out since, with its fantasy element, it can pretty much do whatever it wants. It’s already out there, and I say that as a compliment.

Danica Davidson has written for MTV News, Booklist and Publishers Weekly, among other places, and is currently seeking to publish a YA novel. She can be found atwww.danicadavidson.com and Twitter: @DanicaDavidson.

Osamu Tezuka’s Buddha: The Great Departure
Ghost in the Shell