Calamity of a Zombie Girl Anime Premieres This July 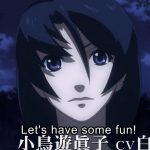 Believe it or not, the anime adaptation of Ryo Ikehata and illustrator Hagane Tsurugi’s comedic horror light novels Calamity of a Zombie Girl was announced back in 2012. Well, it’s finally coming to fruition, with the GONZO and Stingray production set to premiere this July.

Calamity of a Zombie Girl‘s digital distribution kicks off on July 4. Katsuya Iwamoto is in charge of planning, Jun’ichi Takaoka is chief animation director, Kou Otani is on music, Ken’ichi Kanemaki is on the script, and Hideaki Iwami is directing. Check out an English-subtitled trailer below.