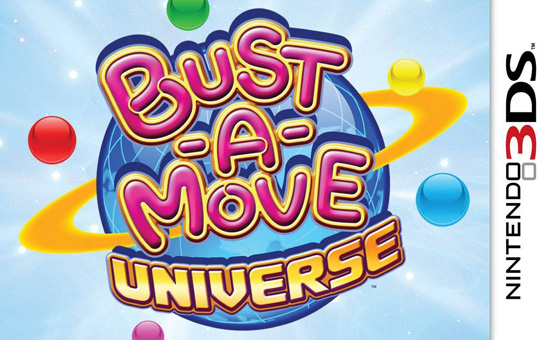 You know what game is awesome? Bust-A-Move. It’s awesome even though Bust-A-Move Universe is the 25th game in the (spin-off!) series that has been going since 1994. That fact is lucky, because honestly, being my most anticipated game in the 3DS launch line-up comes with high expectations. Yep, I just said it—let’s let that smolder a bit before we move on. (Do not be alarmed: no Nintendogs were branded in the smoldering launch line-up disappointment… And yes, I reread that and thought, “They were  branded previously through no fault of mine.” Haaaa.) 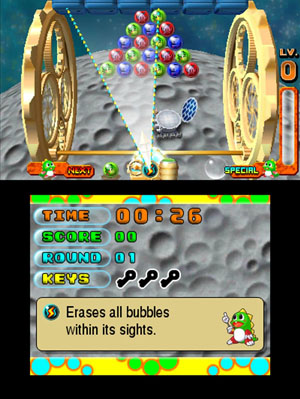 Bust-A-Move: your’e shooting colored bubbles into an ever-lowering ceiling, matching colors to pop them and avoid a nasty death pile-up. Judging the bubbles’ bounce-path off a wall is more fun than mini-golf. Watching them pop in 3DS 3D is more fun than… actually it’s my favorite application of the 3DS effect so far. Take that news as sadface if you like, but it’s true; when you match three or more, they all fly out of the screen (and it’s worth having the slider all the way up for this—the only time you will hear me say that to date) before falling into the background.

Puzzle mode sees you busting through eight planets to save eight dinosaur buddies by making sure to grab keys as you clear out all the bubbles per round in each world. It seems like you would pop key bubbles as a matter of course, but if you get ahead of yourself and shoot out the bubbles anchoring a cluster to the ceiling (great for bonus points, as the entire bunch fall), you’ll drop the key instead of pop it, thus dooming your buddy to life in captivity.

Boss monsters that float out at the end of a world are impervious to all but groups of three matching-colored bombs being stuck to their outer bubble shield. Kind of cute to mimic the typical gameplay, but turns out performing the rescue mission gives you a huge upper-hand that renders strategy unnecessary.

If you’re a seasoned move buster, never-ending Challenge mode on hard (with time-limited shooting and no guide line to do geometry for you) should keep you busy, even with a sprinkling of various special bubbles that clear larger areas when popped. As far as extras, though, it doesn’t seem like it would have been too much to ask for some kind of head-to-head mode, or at least online score rankings. That’s my only gameplay complaint. 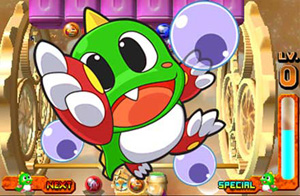 On the whole, you may feel that the 3DS budget price of $30 is a bit too much to pay for Bust-A-Move, even if this version has new power-ups for you to forget to use because you’re just that focused. That said, if you are a fan of the formula and want to see what your 3DS can do, you will not be disappointed with these bubble-popping exploits.