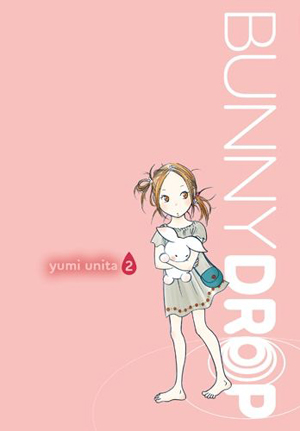 Daikichi’s life has taken a very new turn. After his grandfather died, Daikichi learned that the grandfather had a six-year-old daughter named Rin. Technically Rin is Daikichi’s aunt, but he decides to become her guardian. That means he has to learn how to be a parent—and fast.

Rin warms up to Daikichi, though she’s still something of a fragile child. He gets her enrolled in elementary school and learns how to give her pigtails (not very good ones). He also tries to track down Rin’s mysteriously missing mother. Even though he really cares about the girl, he suspects she would be better off with her mother.

His hunch is that the aforementioned mother was the same woman who worked as his grandfather’s caretaker. He is able to track her down and they meet at a restaurant where the mother says she has no desire to raise Rin. Daikichi and the mother are on completely different wavelengths and don’t understand where the other person is coming from. He thinks she’s immature and shocking, and she doesn’t seem to know how to tell him effectively that some people just don’t want kids. It was the grandfather, she insists, who wanted Rin. In the end, it’s clear that Daikichi will remain Rin’s guardian, and this is for everyone’s benefit.

Bunny Drop does a really good job at taking a subject matter that could easily be cheesy or sappy and instead making it enjoyable. It could be a corny story about finding the meaning of life… through children… or something… dripping with syrupy anecdotes. It’s not a cutesy kiddie story (thank goodness). Instead, it moves subtly and lightly. Daikichi adores Rin, but he also gets frustrated with her and is very easily overwhelmed by all the things he has to do in order to be a parent. For instance, should he sign her up for extracurricular activities to give her a head start, or would that be too much for her? Does she have all her immunization shots? What does she need for school? And is it really safe to let her work with a knife in the kitchen, even if she insists she can handle it?

The artwork is also reserved but gets the point across. It’s not overly detailed or flowery art. It’s fairly basic, but it’s well-drawn and Yumi Unita does a great job at facial expressions. All in all, Bunny Drop is a sincere and gratifying read.