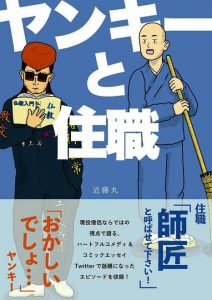 Yoshiyuki Kondo is a Buddhist priest in Japan who has also become a professional mangaka. His manga is called Yankee to Jushoku (translated as Bad Boy and Chief Priest).

In an article on his work with The Asahi Shimbun, Kondo says that Buddhism first really helped him when he was 14, following the suicide of a relative. As an adult he became a Buddhist priest and taught at Buddhist schools. But he was overwhelmed with his work. He turned to his love of art, and this eventually led its way to his manga.

Bad Boy and Chief Priest follows a delinquent youth with a strong knowledge of Buddhism and a neurotic monk.

“I was emboldened when a reader told me that my work gave them the power to live,” Kondo remarked about his work. The manga is meant to be both funny and heartfelt, and help people through difficult times.

The manga was originally shared online by him, but has since been picked up Tokyo-based publisher Cork Inc.