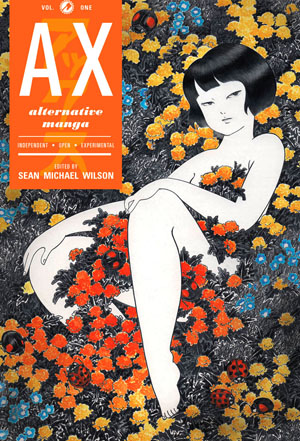 Immediately after finishing Top Shelf’s upcoming AX manga anthology, I started to wonder if the sense of discovery that’s applicable here is alive and well in the general manga community today. It may be a little short-sighted to assume off the bat that it’s not, but it’s that mindset that makes me want to urge more and more fans of the medium to check out this collection of twisted, bizarre, and often beautiful comics.

Reading AX reminded me of when I first picked up collections like Blast Books’ Comics Underground Japan (1996), or Viz’s Secret Comics Japan (2000). Prior to reading these, I had an insatiable curiosity of how far manga could go. I don’t mean that in a strictly perverse sense—though that’s certainly a factor—but more in regards to the limits of sequential expression. At this point in my life I know there are none, but it’s a wonderful thing to discover for yourself.

There may be way more manga on the shelves today (though recent happenings have painted it more as an industry in distress than the thriving bookstore takeover of just a few years ago), but a very small minority of it challenges today’s readers. Sure, one can pick up many books by Vertical, and more recently Viz’s Signature/Ikki lines, for something that’s blazing from the other side of the tracks, but I feel like I’m preaching to the choir if you’re already hip to those. Unfortunately, there’s no constant variety pack available; no present day PULP.

AX is the next best thing to a regular dose of the unconventional. Editor Sean Michael Wilson leads the charge of a mighty task: culling a slew of stories that could even hope to be representative of the Japanese anthology’s over 18,000 page history. Whittling down such a mammoth proportion of manga into the essentials isn’t an exact science, but what we end up with is an appropriately diverse 400 pages, each story showcasing artists you may or may not have ever heard of. I consider myself fairly well-versed in manga, but much of what’s in here was new to me, and that’s part of the fun.

As a result of the variety within, select stories will resonate with some, while falling flat with others. One reader may find a particular story vulgar, while another will find it refreshingly so. 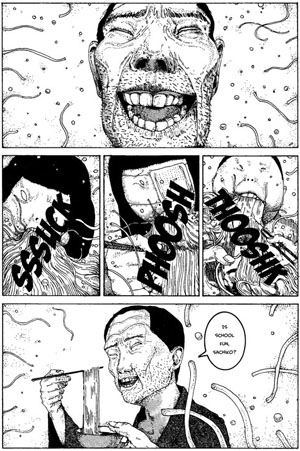 I know for a fact that some people hate artists like Takashi Nemoto (you can check out our review of one of his works, Monster Men, here). Truly, he is the king of crude. Either you appreciate his intent to be as gross as possible—to make the audience want to upchuck, or see how many penises he can fit in a single panel—or you don’t. It’s the comics equivalent of crass drawings on a high school desk.

For every Nemoto in AX, however, there’s someone like Shinya Komatsu, whose “Mushroom Garden” has a quaint fairy tale quality to it. There’s the twisted eroticism of Hiroji Tani’s “Alraune Fatale,” or Keizo Miyanishi’s “Les Raskolnikov,” which has an opening illustration that still sticks in my mind. There are fart gags on one page, and existential musings on the next. You may not like all the stories here, but it’s one of the most effective ways to make pretty much anyone keen to what comics can offer.

The duds here, for me at least, are those that lack any subtlety whatsoever. I’m not talking about the lack of subtlety involved in ripping a huge fart, or waving testicles around from panel to panel; that’s fine, I can live with that. The real eye-rollers are those with in-your-face symbolism and a tendency to come off like the artist just finished their first day of college, mind duly “expanded.” Take “Push Pin Woman” for example, which wears its meaning so unabashedly on its sleeve that there’s zero room for interpretation; it is what it is.

There are a few stories like this in the collection, but the occasional bumps along the road don’t make it any less worthy of multiple readings. Even after finishing individual stories, I found myself wanting to give them a second go right away, occasionally due to the fact that I may not have absorbed the story completely on the first, or perhaps just to spend more time admiring the art.

Speaking of which, there’s as much visual disparity between one work and the next as can be expected of any anthology worth its salt. Some look like nothing more than crude scrawling, while others are lushly detailed. Otoya Mitsuhashi’s “Sacred Light” has an air of impressionism about it. The aforementioned “Alraune Fatale” is both meticulous and hasty in its line 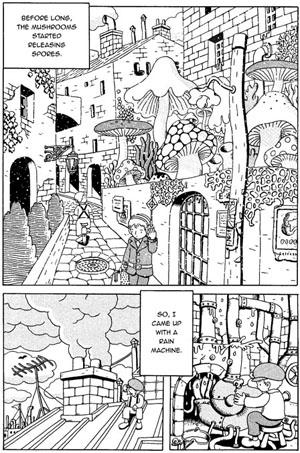 work, the cleanly drawn characters contrasting nicely with heavily cross-hatched backgrounds. Yuka Goto’s “The Neighbor” looks like it was drawn by Napoleon Dynamite. Kazuichi Hanawa’s “Six Paths of Wealth” is perhaps, to me at least, the most gorgeously composed entry, serving as a fitting close to one hell of a book.

I could wax about AX‘s individual tales all day, but it’s best left for you to discover. It is graphic in every meaning of the word, so while it may not be suitable for the young start-up shonen or shojo addict out there, it’s absolutely recommended to everyone else. It’s not every day that manga fans get the chance to pick up a collection featuring both a story called “A Broken Soul” and another called “The Ballad of Non-Stop Farting.” When this comes out in July, I hope everyone finds it looming menacingly atop store shelves, taunting would-be buyers with the secrets of what comics have to offer beyond the comfortable norm.