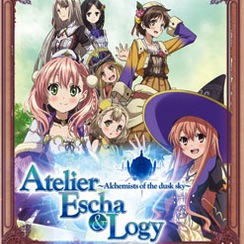 Atelier Escha & Logy: Alchemists of the Dusk Sky debuted as the 15th entry in developer Gust’s long-running Atelier RPG series in 2013, making its way to PlayStation 3 in the west in 2014. It also made the leap to anime that year, and now Sentai Filmworks is preparing for the July release of

on Blu-ray and DVD, now available for pre-order.

As you might have guessed from the title, the story of Atelier Escha & Logy follows two protagonists, Escha Malier and Logix “Logy” Fiscario. The pair couldn’t be any different, but they’re forced to work together to find the cause behind contaminants and pollution that threaten the farmland.

Just like the original RPG on which it’s based, the Atelier Escha & Logy anime is all about teamwork. Can Escha and Logy work together well enough to help the citizens of a world that’s still recovering from a catastrophic event that everyone has come to call “The Dusk”?

are set for a July 7 launch, and while Escha & Logy marks the first of Gust’s Atelier games to get an anime adaptation, hopefully it won’t be the last.