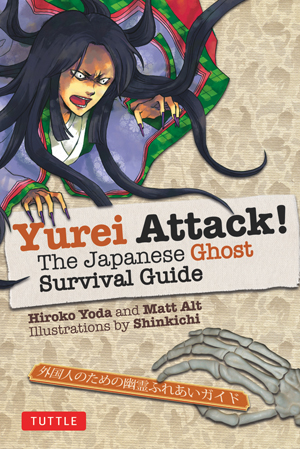 If you’ve seen Japanese horror films like Ring or Ju-on and lived to tell the tale, congratulations: you’ve survived an encounter with yurei, or Japanese ghosts, souls driven by powerful feelings of rage, sadness, or revenge.

But yurei have been a part of Japanese storytelling long before the J-Horror boom – stretching back hundreds of years, stories of yurei are imbedded deep in the Japanese cultural DNA, with the most famous yurei known (and feared) by the oldest centenarian to the youngest child.

Despite that, yurei are relatively unknown in the west. Enter Hiroko Yoda and Matt Alt, the Tokyo-based wife-and-husband writing team known for their expertise in spooky Japanese history. Their new book is Yurei Attack! The Japanese Ghost Horror Survival Guide. It’s the third in a trilogy, following two similar survival guides on yokai (Japanese monsters) and ninja (Japanese, well, ninja). If you’re surprised this information hadn’t been available in English until now, well, you’re not alone.

“We couldn’t believe no one had done this before,” said Alt, with whom we recently sat down in a distinctly yurei–less hamburger joint in west Tokyo to get the inside scoop on the new book.

Yurei Attack!, like the previous two guides, is set up as a series of profiles, detailing each yurei’s biographical stats, origin story, methods of attack, and, most importantly, tips on how to avoid their wrath. Full of faux-handwritten notes and highlighted passages, the book is designed to look like it’s been through a few ghost-hunting adventures.

But don’t let the trappings fool you – this ain’t kids’ stuff. A cursory flip through the book (the first in the trilogy to be released in full color, courtesy Yoda and Alt’s new publisher, Tuttle) reveals a host of shocking images: deformed faces, missing limbs, and decapitated heads make up just a small portion of the illustrations. My favorite is of Hoichi the Earless, captured at the exact bloody moment he, uh, earned his moniker.

Despite their graphicness, there’s something irreverent and almost cute about the book’s illustrations. That’s thanks, according to Alt, to the personality of their creator, the doujinshi artist Shinkichi, who makes her professional debut here.

“All of these women have a little bit of Shinkichi in them,” laughed Alt, pointing to a yurei grinning devilishly while wringing the neck of an unfaithful lover. “I feel bad for her boyfriend.”

And though the information in Yurei Attack! is couched in a fun, faux-survival guide style, it’s all “real” – which is to say, in the words of Alt, “it’s either based on historical fact or actual Japanese folklore – when we insert our own theories or opinions in the book, we make sure to mark them as such.” There’s a wealth of information to be learned here, both on Japanese history (many yurei are the ghosts of famous historical figures) and culture. 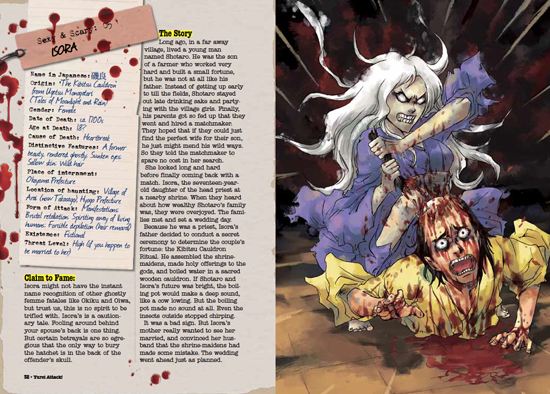 “So many of the references in Japanese movies and anime sail over people’s heads. In Ring, for example, people thought ‘why is she attacking all these innocent people? What’s with the long hair?’ Japanese people, because of these traditions, were clued in right away: ‘ah, she’s a yurei!’ So we’re trying to give people the tools to answer that.”

Though the course of the book, one gets the impression that the Japanese take their spooks a lot more seriously than we do in the west. As just one example, a shrine to Masakado, the ghost of a famous samurai, hasn’t been touched for fear of upsetting his spirit, even though the land, in the middle of downtown Tokyo, would be worth millions in real estate. Yoda and Alt themselves had a preventative exorcism before dishing on Oiwa-san, a yurei known for cursing those who write about her.

“Look, if you held a gun to a Japanese person’s head and said, ‘do you believe in ghosts?’ he would probably say no,” says Alt, “but late at night, when it’s cold and lights are out and there’s weird noises coming from downstairs, that’s another thing.”

In our final analysis, Yurei Attack! is a sharp-looking, well-written book worth picking up. Just be careful about reading it at night – you may start to take yurei as seriously as they do here in Japan.