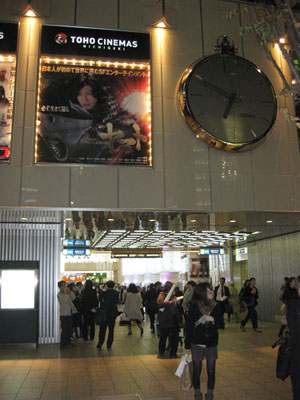 In the final installment of this travelogue for my recent Space Battleship Yamato-themed trip to Tokyo, I’m going to switch gears and talk about… Space Battleship Yamato. Some of you may have read my early review of the new live-action movie here in November. Now that I’ve had the chance to see it a few more times, I can share some additional thoughts.

From the moment I knew of this movie’s existence, the experience I wanted was to see something completely new and surprising. I’ve found that’s a good way to keep yourself from slipping into the “checklist” mentality, which isn’t fair to a filmmaker and can really wreck a movie. That’s exactly the experience I got.

The story changes, along with the pace, came fast and furious. Almost before we had a chance to absorb one subplot, the next one came racing in. This also helped to prevent “checklist syndrome,” since I couldn’t say to myself, “oh, this is the Rainbow Star Cluster battle” until it was already half over.

The anime became famous for its long, lingering shots of ships and space battles, but that’s a product of the pre-Star Wars era. A fast pace is a boon to CG effects shots, which are always a heavy drag on a film’s budget, but it does make for a different kind of story.

Thus, the film never quite delivers the same feeling of lonely vastness you get when Yamato drifts ever so slowly off into the distance with only XX days left. Scenes like that were absolute murder to animate one frame at a time for TV, but they created a unique tone that the movie does not share. A CG version of the famous Yamato flyby would have been awesome to behold on a big screen, but would probably have fallen outside the scope of the directorial style. Also, the “World War II in Outer Space” aesthetic was discarded in favor of high-tech combat against an utterly alien foe. Even the original staff went in that direction when making Farewell to Yamato, which was amped up and quickened for the big screen. The way we measure that has changed since 1978, but the intention hasn’t. 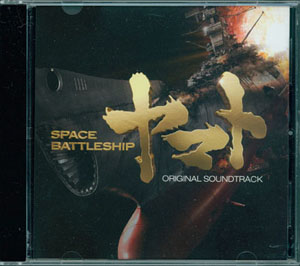 So, without giving away any story points (though there’s a full synopsis at starblazers.com if you simply can’t wait anymore), I can tell you that the live-action Yamato movie is a new, faster-paced version of an old favorite that does nothing to dishonor its source material. Exactly the same can be said for Star Trek and Battlestar Galactica, which puts it in good company.

Seeing it in Japan and discussing it with Japanese fans added some interesting context. The unanimous opinion was that it was the best-looking Japanese SF film we’d ever seen, and it could stand easily among the top US films in visual terms. But the locals were not impressed by Takuya Kimura’s performance as Kodai, grumbling that he basically just plays himself in every one of his movies. Being removed from both the Japanese language and celebrity culture allows the rest of us to ignore this. Nothing he did particularly bothered me, since I had nothing else to gauge it against. But all the other actors got top marks, and the twists to the storyline had made it an engaging experience for everyone. Not a word was said about any denigration to the original; the movie stands on its own and gives you just enough of what you love to keep it authentic, particularly the score.

Speaking for myself, I can’t recommend it highly enough. Composer Naoki Satoh samples liberally from Hiroshi Miyagawa’s original anime score, weaving both the main theme and the “Infinity of Space” melody so thoroughly into the music that they become part of the film’s DNA. Satoh’s own tracks are equal in scope and majesty, so there are no drops in quality. Most importantly, the entire score is rippling with that key ingredient that has always made Yamato music great: POWER. No matter what opinion you eventually form about the film, the soundtrack is flawless.

Incidentally, we also got some box office news after the first two days. The film had scored number 1 on its opening day, beating out even the new Harry Potter movie. Part of this probably had to do with premiering on the first of the month, a day in which all Japanese movie theaters drop their ticket prices to 1000 yen, but it wasn’t the only sign of success: Yamato had already been sold to six countries in both Europe and Asia, and American distributors were expressing interest. Not a minute too soon. 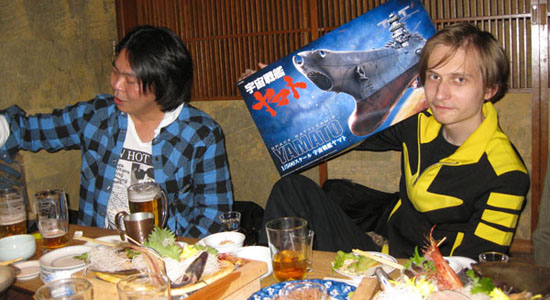 The last full day of my trip was Sunday, December 5, which culminated in a “bonenkai” (goodbye-to-the-year party) with friends new and old, Yamato fans all.

Over the course of the meal, we learned that some of the guys had “gone pro” since we saw them a year ago and worked on the Yamato Resurrection Complete Box for Enagio Studio, Yoshinobu Nishizaki’s company. I’d gotten my copy of it just a few weeks earlier, so I could proudly say that I’d supported their work. It came with one heck of a bonus item, a bottle of the actual sake drunk by Dr. Sane. It shipped separately to my buying agent, so I asked him to hold onto it for my visit. I had a feeling it would come in handy at some point, and this was it. I got a round of applause when I brought it out and filled everyone’s glass on the down-low since it was definitely not a B.Y.O. eatery. I didn’t think the odds were good that I could fly it home safely, and there was no better way to enjoy it than with friends who could truly appreciate what it represented. 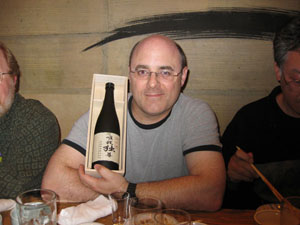 Sword Takeda, my host and translator, had been welcomed into the fold by then, talking energetically about all our adventures and more. The guy he really wanted to meet was Noboyuki Sakurai, who has been a professional modeler for years. His work is often showcased in Dengeki Hobby Magazine, the new issue of which had just been published. Known to the modeling world as THE Yamato guy, he was assigned to build the just-released-that-day 1/500 model kit from Bandai and his photo-spread was in that very issue of Dengeki. Another member of the gang had brought the kit itself, so we all got a closeup look.

The evening culminated with the arrival of Mr. Hirotaka Furukawa, COO/CFO for Enagio Studio, who had come to meet me in person. I’d asked Sword before the trip to request an interview with Yoshinobu Nishizaki, and when that became an impossibility on November 7 (the day he died under very strange circumstances) I asked instead for an interview with his adopted son Shoji, now the head of the studio. It was still too early for this and things weren’t quite organized enough to accommodate the request. To my complete surprise, Furukawa had made the effort to find me and offer his apology. 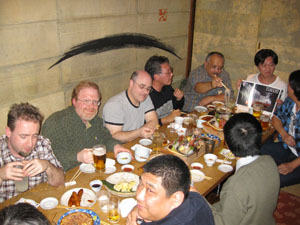 As part of our conversation, he announced to everyone in the room that Shoji Nishizaki would be formally introduced as the full inheritor of his father’s rights at the public funeral on December 10. Thus, everything started by the father would be continued by the son. Yamato would go on.

The first big project to come in 2011 is the Director’s Cut of Yamato Resurrection. I originally thought this would simply involve the restoration of 14 minutes of cut footage, but the sound is also being redone; newly-designed sound effects will be replaced by original vintage ones, and all the classical music tracks will be replaced by Miyagawa’s score. Knowing this gives me a whole new outlook on Enagio’s intentions. The fate of a sequel is still unclear, but we learned that the original intention was to make a trilogy; Kodai would travel to the “black hole dimension” to find Yuki in part 2 and everyone would find their way home in part 3. Let’s hope fate allows that to happen.

There is a TV series in the works as well, but it would be premature of me to say anything about it. For now, we can all be content with the fact that we’ll be off to outer space again when the time comes. As I said to Sword Takeda when we parted after dinner, “This is just the beginning.”

Visit starblazers.com right now for news about the Yamato movie and check in on February 2 for an expanded edition of this travelogue with more photos!