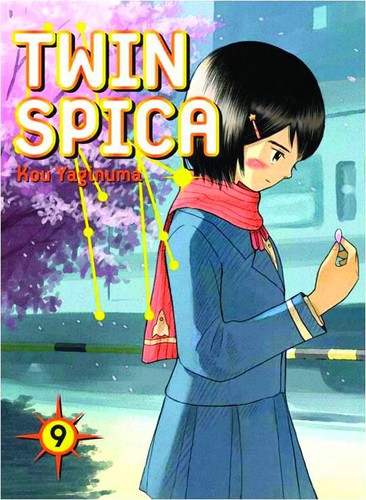 A lot is going on in the latest volume of Kou Yaginuma’s Twin Spica. In addition to the space school adventures of the principal cast, one of their peers is possibly about to embark on the opportunity of a lifetime. The pale, eyebrow-less Shu Suzuki bumps into a boatload of fortune when he’s the sole remaining high schooler in the astronaut selection test. All Asumi and her friends can do is look on in admiration and hope for the best, but they’ve also got their work cut out for them as they enter another new, more difficult year at the Tokyo Space School.

Volume 9 sheds light on a lot of conflict that’s central to Twin Spica‘s narrative, especially the tragic fate of “The Lion,” the rocket that crashed so many years ago near Yuigahama. The ripple effect of that crash is still felt throughout the lives of almost everyone central to the story, so learning more about the circumstances behind it is pretty revealing.

Meanwhile, Asumi experiences a blast from the past as an old friend from long ago enters her life once more, under unusual circumstances. The whole situation seems to reflect a theme inherent to this volume specifically. While everyone in Asumi’s circle, herself included, moves along toward the future, the specter of the past continues to creep and slither into every corner and crevice.

A few mysteries remain boldly out of reach in Twin Spica, but the characters continue to grow, so at times pondering the “why” of one particular aspect takes a back seat to simply following the daily lives of Yaginuma’s young dreamers. At 16 volumes total, there’s still quite a bit of story to tell and, honestly, if you had asked me after the first volume or two if I thought it would hold my interest for the duration, I would have had my doubts. Despite its myriad charms, I considered whether or not the somewhat languid pace would end up being detrimental to the story. I’m glad I was proven wrong, as the flow Yaginuma established in early chapters has only grown stronger over time.

The art style has also improved, though there’s still some awkwardness present in characters from time to time. Something about the way he draws expressions occasionally reminds me of a generic “how to” art book, but those instances are few and far between. The majorly impressive moments come via the occasional splash pages and two-page spreads, which are simultaneously gorgeous and ponderous. Flipping past these briefly would be doing yourself and the series a major disservice.

At this point I’m invested in Twin Spica for the long haul, and anyone who enjoys a more atypical manga story should definitely get on board. Even when the series occasionally gets a little “out there,” it still feels like a very personal tale, and that’s a testament to the heart Yaginuma clearly values foremost in his work.