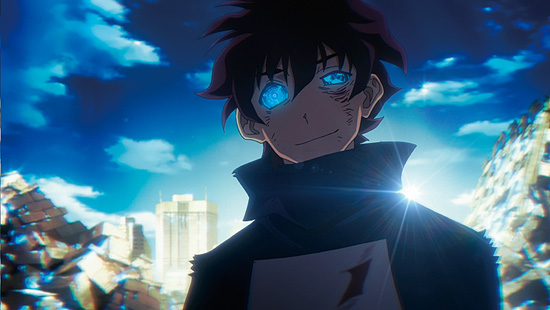 As I write this, Kabaneri of the Iron Fortress is the most popular anime of the spring 2016 season, and it’s easy to see why—it combines the apocalyptic melodrama of Attack on Titan with the old-school design style and attention to detail of 1980s direct-to-video anime. But 2015 had its own kick-ass series that brought together old- and new-school anime creators: Blood Blockade Battlefront.

Based on a manga by Trigun and Gungrave’s Yasuhiro Nightow, Blood Blockade Battlefront (or BBB, as tongue-twisted fans have dubbed it) has the author’s name written all over it. While that’s literally true (the background artists toss Nightow’s name onto the signage on occasion), the show also features an American setting, plentiful well-dressed adult characters, and more Christian imagery than an Evangelion-themed Communion. Bringing Nightow’s retro vision to the screen is the acclaimed Studio Bones (Fullmetal Alchemist, Eureka Seven) and up-and-coming director Rie Matsumoto. 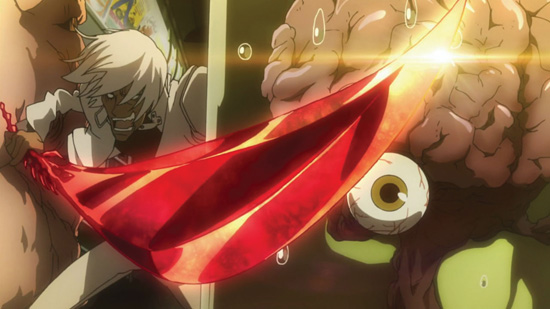 Leonardo Watch is an aspiring journalist who has just moved to Hellsalem’s Lot, the city formerly known as New York, now enveloped in a supernatural fog and populated by a melting pot of humans and otherworldly monsters (see sidebar). There he joins the secret society Libra, whose members use their own blood as magical weapons against bad guys stirring up trouble in the city. Leo has no such blood-based powers, but he has the “All-Seeing Eyes of the Gods,” magical eyes that allow him to discern the true nature of any object he looks at, thanks to a selfless sacrifice by his sister.

Over 13 episodes, Blood Blockade Battlefront introduces a huge cast of heroes and villains, including a deadpan suit-pants-wearing werewolf, a supernaturally lucky vampire hunter, and a mummified butler. These introductions whiz by in between the massive set pieces and kinetic, superpowered action, and the irony is that the characters, as lively and likable as they are, don’t get much individual attention before the series moves onto the next story beat. 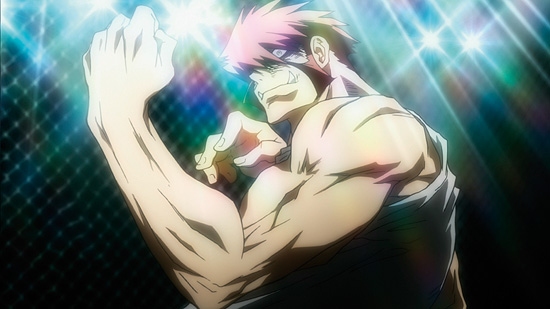 While it’s easy to lay this at Matsumoto’s feet, it feels like she was tasked with making a greatest hits collection for the manga and is doing the best she can to cram the best parts into a short TV series. She throws aside countless opportunities for character development in favor of simply adding more ingredients to the pot, but to her credit, the series still careens along with an addictive, nervous energy. Weirdly enough, there’s also an anime-specific storyline that parallels Leo’s own tragic past with a pair of twins and builds up its tension quite nicely, but there are so many other elements in play that the series never really delivers on the premise.

Nevertheless, Matsumoto shines in the action scenes, which have a scale, weight, and irreverent sense of humor reminiscent of FLCL and Lupin the Third: The Woman Called Fujiko Mine. Characters strike unabashedly Hollywood-action-movie poses and trade banter while goofy cartoon arrows point out their locations within huge apocalyptic cityscapes (a gag she carried over from Kyousougiga). In the dramatic scenes, Matsumoto uses wide shots of characters framed against ornate, occasionally surreal imagery, accentuating their smallness in a big city full of supernatural mysteries. 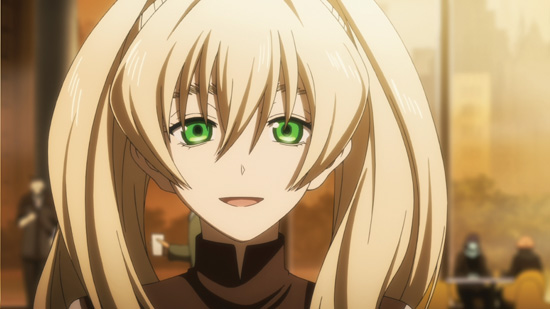 Indeed, Hellsalem’s Lot is the star of the show, with its grimy streets, bluesy English-language background music, and imaginative monster
designs. This is in no small part thanks to the formidable pedigree of the show’s designers, including background art director Shinji Kimura (Tekkon Kinkreet), creature designer Koji Sugiura (Escaflowne), and Mr. Cowboy Bebop himself, character designer Toshihiro Kawamoto.

Notable among the voice cast, which includes Daisuke Sakaguchi, Mamoru Miyano, and Nana Mizuki, is Rie Kugimiya, who shifts her voice to play the aforementioned twins—one male and one female. Making things even more interesting, Mizuki also plays the brother when he is possessed by a demon, creating an eerie similarity between the three characters. 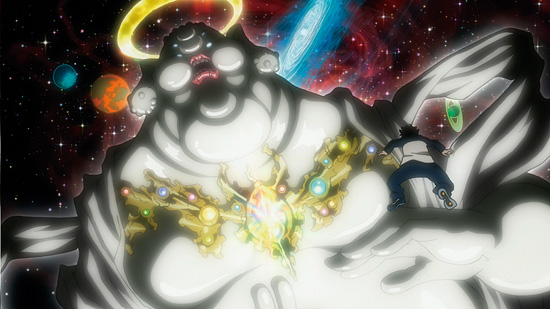 Finally, I would be remiss to leave out Blood Blockade Battlefront’s great opening song from Bump of Chicken and its phenomenal ending sequence, featuring a bouncy rock song from Unison Square Garden and a delightful conceit: the show’s cast, both heroes and villains, wildly dancing on a stage in front of a red curtain. It’s a perfect, infectiously fun way to top off each episode of a series full of likable characters, and an excellent example of how animation can express personality entirely through physical motion.

The irony of Blood Blockade Battlefront is that it’s effectively an ad for the manga, but it’s all so lovingly put together that it makes me wish Matsumoto and her staff had time to adapt the whole thing. All the pieces, from the larger than life characters to the explosive action scenes to the catchy music, work great on their own, but together the series is a bit of a rushed mess. Unsurprisingly, Episode 12 aired three months late and with a 46-minute running time since the story wouldn’t fit in a normal episode. That sounds like a show that deserved a full 24 episodes, but as it stands, Blood Blockade
Battlefront is a thoroughly entertaining ride
that buries its considerable substance under mountains of style.