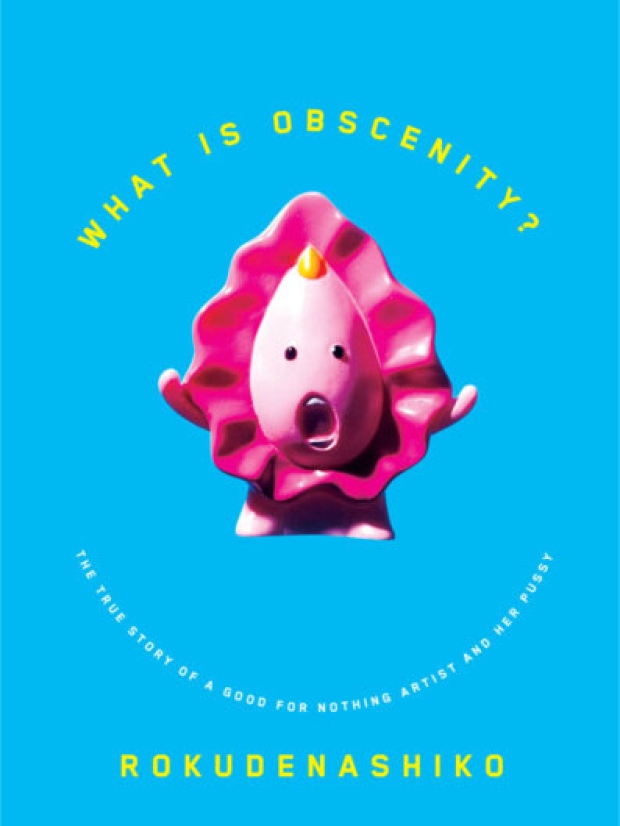 In 2014, artist Megumi Igarashi, a.k.a. Rokudenashiko (roughly, “Li’l Good-for-Nothing”), was arrested for violating Japanese obscenity laws. Her crime: emailing 3D printer scans of her genitals to the backers who supported her crowdfunding campaign to build a full-size kayak in the shape of her vulva. Thanks to international press and an online petition, Rokudenashiko was released and is once more free to row her giant vulva down the Tama River.

Half art catalog, half graphic novel, What Is Obscenity? combines photos of Rokudenashiko’s “manko (pussy) art” with an autobiographical manga she drew about her arrest and imprisonment. In both her art and her writing, she comes across as both an impassioned feminist activist and a playful prankster. She asks meaty questions about cultural discomfort with the body, sexist double standards (cheekily pointing out the giant wooden penises that have long been part of Shinto festivals), and abuses within the Japanese penal system. But at the same time, she can’t stop giggling like a schoolgirl over making sparkly vulvas or forcing a court recorder to say “manko” over and over.

Dramatized in cute, breezy cartoons, Rokudenashiko’s story bubbles with outlandish energy. The book, designed by the legendary Chip Kidd, breaks up the comics with photos, interviews, essays, and pop-culture ephemera, creating the feeling of a pink-papered scrapbook. Rokudenashiko embraces the silliness of her art as part of her statement. “Though this was kind of a joke at first,” she writes, “now I am joking around with every ounce of my body and soul.” Recommended.

Reviews 1117manga 1437rokudenashiko 1what is obscenity? 1