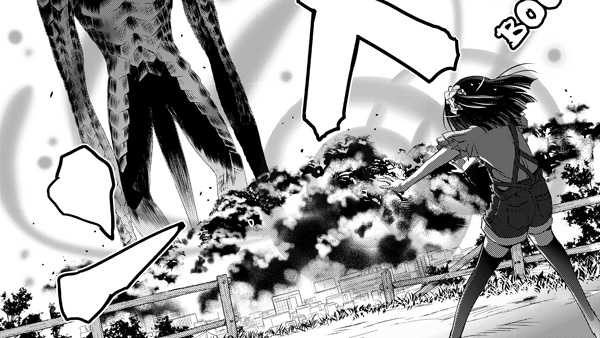 When Earth is invaded by dragons—giant reptilian monsters—tween siblings Mitsuki and Yuu are separated and their town and family are destroyed. Three years later, Yuu has grown into a young man doing unsavory jobs to survive, when he’s summoned to appear at Midgard Academy, a secretive island school where his sister Mitsuki is student council president. But she’s not the same little girl she used to be: now she’s in charge of training the “Special Ds” whose dark-matter powers alone give humanity a chance to defeat the dragons.

There’s just one catch: “Special Ds” are all girls, except for Yuu, and our hero has barely arrived on the island before he trips over naked “D-Girl” Iris Freyja who lost her swimsuit while swimming. “I’m not an idiot!” she insists. “I’m not an idiot or an airhead or a straggler!” Yuu soon meets the rest of the all-female cast, who have names like Firill Crest, Lisa Highwalker, and Ren Miyazawa (Okay, that one’s normal).

That’s when Mitsuki reveals the true dark secret of the D-Girls: they’re actually female dragons in human form, and if the giant dragons can find them and mate with them, they will transform against their will and give birth to a brood of dragon young! “This modified island is a fortress specifically built to intercept dragons! In short, Midgard is an interception base that exists to fight off males starved for females!”

Based on a light novel series, Unlimited Fafnir graverobs themes from better manga and anime 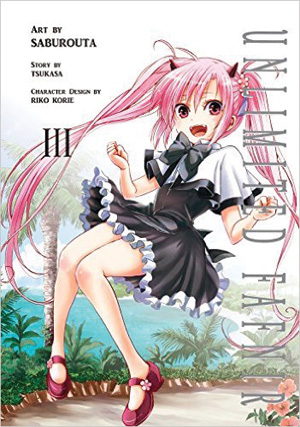 (Evangelion, every boy-in-a-girl’s-school story) and puts the nail in the coffin with terrible, generic art. Typical for a poorly paced adaptation of a light novel, they don’t actually encounter a dragon in Volume 1: instead, Yuu and the D-Girls spend 200 pages training to use their superpowers X-Men Academy style, while Iris hits on Yuu and flashes her nippleless breasts.

The relationship between Yuu and Iris is a particular low point; she just wants to have sex with him because if she’s not a virgin she’ll lose her dragon powers, while both Yuu and Mitsuki reassure Iris that they won’t let her transform into a dragon, they’ll kill her first. A heroine whose dearest wish is to get pregnant, lose her superpowers, and/or get killed—that’s great! But ultimately it’s not the turgid, clichéd story but the bland art that makes this watered-down broth of a manga unreadable.