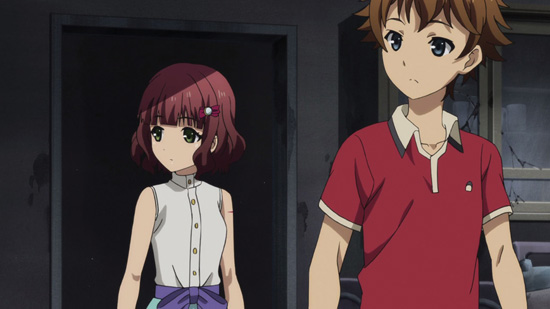 The Lost Village, aka Mayoiga, is definitely one of the most strangely alluring anime series of the spring season. The deadly combination of director Tsutomu Mizushima (Girls und Panzer, Squid Girl, Prison School) and writer Mari Okada (Kiznaiver, Black Butler, Toradora) has yielded something that’s simultaneously suspenseful and stupid, and all evidence points to the staff at Diomedéa (KanColle, Riddle Story of Devil) loving every single minute of it.

The opening episode drops us right in the middle of it all, as a tour bus happily barrels toward a mysterious destination. It’s not just mysterious to us, either; the folks on the bus are on their way to Nanaki Village, which has somehow remained undiscovered by the public at large after all these years. According to the urban legends Nanaki Village is a utopia, allowing visitors to discard their old lives and start anew. That’s exactly what everyone on the bus wants to do, and they all have their own personal reasons for leaving everything behind. 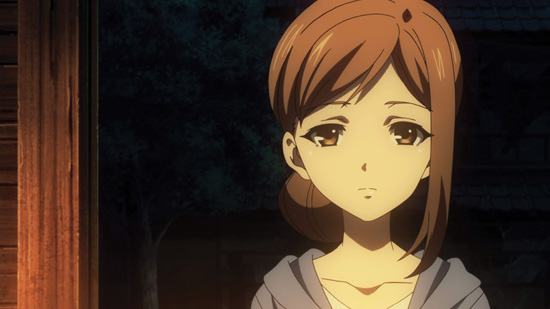 They don’t get the welcome they expect once they finally arrive at the hard-to-find village. Instead they find a completely deserted ghost town full of contradictory evidence. In one home it appears as if no one’s been around for at least a year, but crops on the outskirts show signs of a recently abandoned community. Whatever’s really going on, it makes it difficult to know how to go about starting a new life there, and then there are the noises—the roars and snarls, and those massive bear-like tracks in the dirt. Is it worth risking everything just to avoid the troubles inherent to life as we know it?

The cast of The Lost Village is expansive, but the character designs by Naomi Ide (Gingitsune, KanColle) do a solid job of making it easy to differentiate one from the other. A few of the characters are fairly eccentric, but in the beginning it’s tough to tell whether they’re actually like that or just creating a fresh persona for their new life in Nanaki Village. Unfortunately, each and every one of them quickly realizes that starting over isn’t as easy as it sounds. Not only does the natural order of society worm its way into their supposed utopia before it even has a chance to take root, but the new residents of the village end up finding a major roadblock in the ever-present hangups of the past. 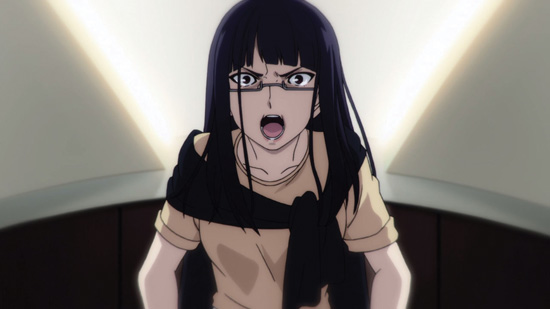 Going into specifics as to how all of this goes down would be ruining most of the fun of The Lost Village, which, while not always successful in its twists and turns, at least keeps the audience guessing throughout the run. Early episodes throw out a few misdirections as to what kind of story this is going to be. Will it be a straight-up horror series, or something more quietly psychological? As soon as you start leaning toward the latter, The Lost Village gets louder and weirder, and then brings it back down a notch to spin off on some other bizarre tangent. If that makes it sound disjointed that’s not the intention, because despite its off-kilter style The Lost Village is remarkably coherent.

For all the bug-eyed, seemingly dumb ideas it throws out with reckless abandon, it would be a disservice to chalk The Lost Village up as a silly show that doesn’t know what it’s doing. Signs that it’s immensely self-aware are there at the very beginning, from sudden leaps into absurd wordplay comedy to the ways some of the characters react to their own bizarre situation. At times watching The Lost Village is like rubbernecking at an accident in traffic, but it’s an oddly satisfying disaster to behold.