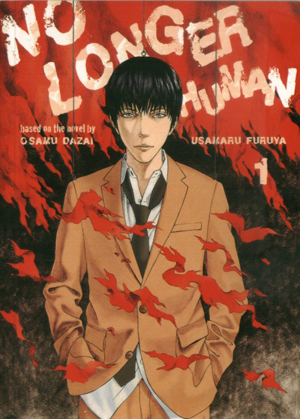 Yozo Oba has been living a lie his entire life, and he’s damn good at it. Far from your average teenager with easily defined emotional issues, Oba plays off everything he feels on the inside to his advantage. He is the class clown. He is loved and appreciated by all around him. He even (gasp) gets laid! Pretty regularly! Sure, he ends up paying for it sometimes, but the exclamation point stands. However, on the inside, he finds himself shrinking away from humanity. He has wealth, good looks and, on the exterior, at least, appears to have an endearing personality.

Nothing could be further from what Yozo Oba is becoming.

Every move he makes is coldly calculated; his words and actions are evaluated and analyzed to perfection. Every smirk is a knowing facade, every gesture a manipulation. He plays his peers as puppets, but feels just as strung up himself. The bottom line, as he puts it: “I don’t understand human beings one whit.” The thing is, putting on an act is tiresome. Any construct without a proper foundation is doomed to eventually collapse, and that’s precisely what happens in Usamaru Furuya’s No Longer Human (Ningen Shikkaku).

Adapted from a popular 1948 novel by Osamu Dazai, No Longer Human is framed as if Furuya himself stumbled upon the story of Yozo Oba while digging around the ‘net for his next big manga concept. What he finds is a hauntingly revealing blog, which tosses us right into Oba’s very thoughts. Since the audience is in on his neverending game from page one, he leaves his emotions naked throughout. The majority of the manga is drawn in the Furuya style most will recognize from one of his more depraved outings, Lychee Light Club, but the heights of emotion and passion are depicted with charcoal-tinted beauty.

The setting is modernized, but still reflects the inner turmoil of Dazai’s story. Some of No Longer Human‘s emotional beats and the artistic interpretations thereof can be a little on the nose, but for the most part it is a deeply personal story brought to life by the pen of one of manga’s greats. From the very start it’s clear that we’re going to witness a bright, if extremely closed off young man go from riches to rags both materially and emotionally, but it’s the methods by which he does so that keep the pages turning. The winding, descending staircase appears without end.

This isn’t the first time Dazai’s chilling work has been adapted—No Longer Human has been the subject of a live-action film, the anime Aoi Bungaku, and other manga adaptations. While I can’t personally compare Furuya’s—originally serialized in Shukan Comic Bunch in 2009—to the rest, the care taken in composing each page is clear. There’s a lot going on in this relatively short half of the story, and now it’s just the grueling matter of waiting for the rest to hit store shelves.