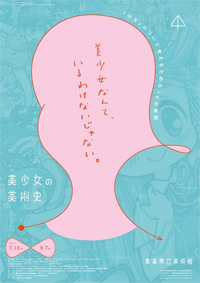 Bishoujo (“beautiful girl”) is a word that means many things to many people, particularly when taken in the context of anime and manga. An art exhibition opening in Japan next month is looking to break Bishoujo out of its box, look at it from every perspective imaginable, and see if it can dig up some new insight on the subject.

The exhibition, running from July 12 to September 7, will feature more than 300 works by around 110 artists, each focusing on different perspectives relating to “girlhood” in all its forms, with themes like “Magical Girls,” “A Girl’s Life,” and “Magical Girls and the Desire for Transformation.”

Some of the artists whose work will be appearing in the gallery are legends: Saikano author Shin Takahashi, Magical Angel Creamy Mami character designer Akemi Takada, and deceased God of Manga Osamu Tezuka, whose defining work on pioneering manga like Princess Knight practically created a genre all by itself.

The exhibition will also be showcasing an original anime film based on the classic Japanese novel Joseito (“Schoolgirl”) by acclaimed 20th-century novelist Osamu Dazai, and directed by freelance animator Shigeyoshi Tsukuhara.

Once the event’s run at the Aomori Museum of Art is over on September 7, it’ll be heading to the Shizuoka Prefectural Museum of Art from September 20 to November 16, and the Shimane Prefectural Iwami Art Musume from December 13 to February 16, 2015. If this sounds interesting, you have plenty of opportunities to schedule your trip accordingly.