My Little Pony Can’t Possibly Be This Stylin’!

While a relatively niche spectator sport in the US, Japan takes its ponies more seriously. Called Keiba, It’s home to over 21,000 annuals races which are watched and observed by numerous salaryman as much as passionately as any Hanshin Tigers vs. Yomiuri Giants match. The Japan Racing Association is host to some of the biggest purses in the world – attractive especially given how horse racing is one of the few legal forms of gambling in Japan. On the other hand, the smaller, separate National Association of Racing in the country has seen better days, with numerous local racecourses being shut down.

Still, Kawasaki Racecourse in Kanagawa Prefecture has been trotting along, finding ways to keep things fresh for fans and newcomers alike with, among other things, cosplay campaigns. These involve “lead ponies” – racing parlance for horses that guide the main racers onto the track, usually consisting of retired racehorses themselves – and their jockeys giddying up in various kinds of get-up. According to the Kanagawa Shimbun online magazine Kanaloco, previous campaigns including police uniforms for anti-drug campaigns or yukata for the summer. 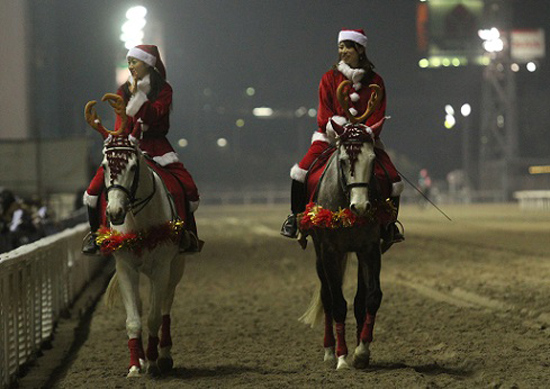 This being the holiday season, it’s only logical that the Kawasaki Racecourse decided to go with going for a Christmas theme for the week of December 14th to the 17th. As usual for the racetrack, all of the cosplay for horse and human alike is originally crafted.

Keiba enthusiasist @mambo_ds96 writes “The famous cosplaying lead ponies of Kawasaki Racecourse. This Christmas style is even flashier than before. It doesn’t have all that much to do with keiba itself, I’m happy to see such thoughtful work put into it.

@musou1709 is more concise with at Kawasaki Racecourse, even the lead ponies are showy!

Given that Christmas is more about style than substance in Asia, it is not surprising to know that the campaign ended a week ago on the 17th. However, we figured that readers can still appreciate some holiday horseplay.