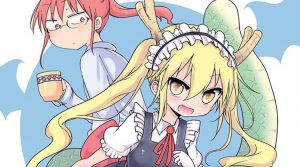 Miss Kobayashi‘s Dragon Maid—the manga series that previously inspired a pair of manga spinoffs and an anime adaptation by Kyoto Animation—is getting ready to wrap up. According to this year’s December issue of Futabasha’s Monthly Action magazine, Coolkyoushinja’s series is headed toward its ‘climax.’

The manga first started its run in the first edition of Monthly Action magazine back in 2013. Crunchyroll simulcasted the anime and Funimation streamed the dub, with the full series hitting home video in April of this year. Seven Seas Entertainment publishes the English edition of the manga, which is described like so:

Miss Kobayashi lives in a ordinary apartment, along with her new maid, Tohru…a dragon girl! Tohru despises all humans except for Miss Kobayashi, who she adores. Tohru works diligently to serve her beloved mistress, but there are a lot of little things that she can’t seem to quite get right…. Take a peek into the daily life of a hard-working office lady and her inept dragon maid in this inhumanly delightful comedy!