Fans of the work of Hiroyuki Imaishi—director of Dead Leaves, Gurren Lagann, and Panty & Stocking with Garterbelt—should start looking forward to his next team-up with writer Kazuki Nakashima. The pair are returning along with other former Gainax staff at anime studio Trigger for a new TV show called Kill La Kill.

The series is being revealed in the June issue of Kadokawa Shoten’s Monthly Newtype magazine. Kill La Kill sees Imaishi directing, with Nakashima (Gurren Lagann, Nodame Cantabile: Finale, Re: Cutie Honey) supervising and writing the scripts for what will be a battling schoolgirls action show.

The schoolgirls in question are Ryūko Matoi (left) and Satsuki Kiryūin (right), who fight fiercely at a school ruled by force and disrupted by the arrival of a sword-wielding transfer student. 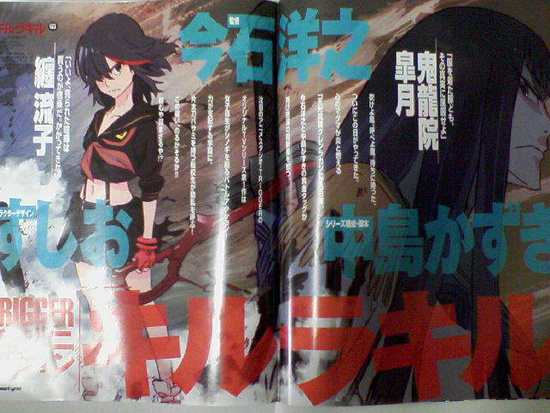 For a taste of what Trigger is capable of, the studio recently made their full Anime Mirai short, Little Witch Academia, viewable online.