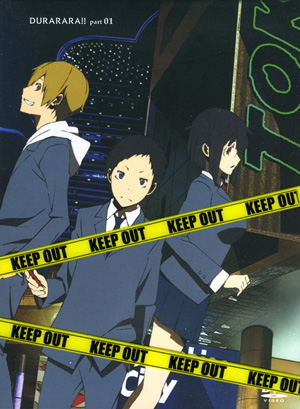 Every so often, whether you’re reviewing a visual work or just taking in a casual screening, you get something that makes you say “What the hell did I just watch?” In recent times this has given me reason to re-watch titles such as Christopher Nolan’s Inception and Satoshi Kon’s Paprika and come away satisfied. In the case of the anime series Durarara!!… well, read on.

Taking place in the city of Ikebukuro in Tokyo, Durarara!! focuses on several folks and their stories involving gangs, supernatural forces, the Internet, motorcycles, urban myths, martial arts, and the street sales of sushi. At the center of things are three high school students, whose lives interconnect with all the craziness surrounding them. In the first episode we’re introduced to Mikado Ryugamine, a 15-year-old boy who has just moved to the city. He feels he hasn’t really lived at all since he’s been growing up in a small town, and listening to the crazy stories of his friend Masaomi Kida has made him feel even more inadequate.

Masaomi has been living in the city for a while and has developed into a loud, boisterous teen who’s apparently seen/heard a lot during his time in Ikebukuro. He invited Mikado to the city and the high school they both attend, though Mikado has a tough time adjusting. There’s a cute girl in his class named Anri who talks him into being a co-class representative, though she has her own issues (more on these later) about which she keeps quiet.

Along the way, Mikaido comes to learn about some of the craziness of the city. For example, there are street gangs who stay somewhat underground but all wear different colors to identify with each other. (Maybe Ice-T could rap about them.) The most notorious and mysterious group that’s spoken of is called The Dollars, who only meet on the Internet, so no one’s sure of their intentions or membership. 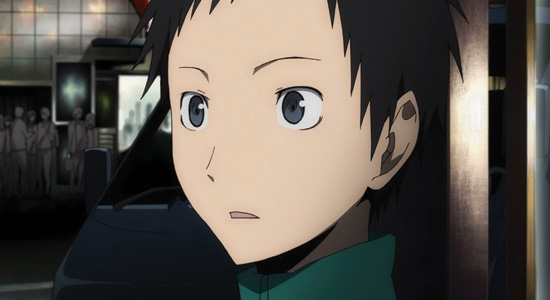 There are also reports of a mysterious rider who uses a black motorcycle and may or may not be headless, despite wearing a motorcycle helmet with cat ears. Mikaido catches a glimpse of this person riding off at the end of the first episode. This is connected to a young lady named Celty Sturluson, who currently resides with her roommate, Shinra. Celty is what’s known as a Dullahan (a Celtic spirit) who is looking for her head, gone missing 20 years earlier. She’s strong and very hard to hurt, but is afraid that she can be killed if something happens to her head, which she’s tracked to Japan. Shinra is very much in love with her, but Celty dismisses these feelings for the time being.

In addition, there are some fun and interesting side characters we come to see as the players are introduced, such as a dapper, blonde bartender who exhibits intense rage and physical strength during gang fights. There’s also a large black man who sells sushi on the streets and has incredible martial arts skills. Rounding out our motley cast for this review is Izaya, a somewhat emotional kid who dresses in black and, although full of confidence, demonstrates strange ideas on how to win a girl’s heart. He’s also borderline insane and may have his own superpowers. Everyone seems concerned, though, about a slasher who prowls the streets at night and kills people brutally.

The events of the first five episodes found on this DVD are pretty much summed up by Mikaido in the closing moments: “It may not look like it at first, but everything that happens in this town… is somehow related. It’s all part of an awful, larger truth that’s beyond our comprehension.” The show feels like an answer to the hypothetical question “What if Quentin Tarantino had directed FLCL?” Plotlines are approached from multiple viewpoints over time and some of the most outlandish happenings take place around these characters. 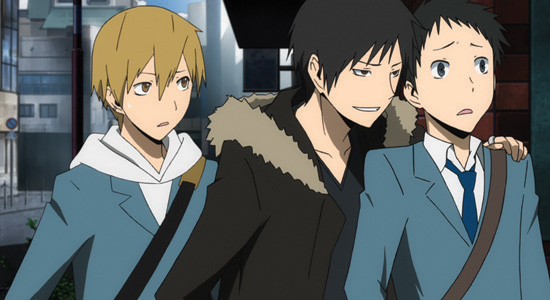 Outlandish can also be a good way to describe the show overall and the characters designs by Suzuhito Yasuda (Yozakura Quartet) and done up for animation by Takahiro Kishida (Macross Zero, Earth Girl Arjuna).  Everyone is very cartoonish as if ready to leap right off a manga page with hundreds of motion lines behind them. Director Takahiro Omori balances the kinetic craziness these characters generate through explosive situations and horrific subtleties, much like he has in Baccano and, to a somewhat lesser extent, Hell Girl. It’s tough to keep comedy, drama and terror all on an even keel, but Omori manages to do so pretty well in these first few episodes based off the novel series by Ryohogo Narita (who also wrote Baccano).

The voice acting is also decent here. Due to the fact that the screener I watched only had English audio, I can’t comment on how the actors did in comparison to their Japanese counterparts, but everyone sounded appropriately like teenagers and emo young folks as needed. There’s one character in the 4th episode who comes off as an Eminem-wanna be with his hip-hop dialect right before a big street rumble. I have to say he sounded right for the role. I don’t know if he’s a minor character who’ll become important later or not, but this was one instance where it seemed an American voice would fit better than his Japanese seiyuu.

After watching this first disc, there are still a lot of questions about what’s going on, but there’s also enough substance to keep a viewer interested and willing to see the overall story through. I can’t tell you it will definitely have the satisfying conclusion like the films referred to at the beginning of this review, but one thing’s for certain: whatever the final outcome it certainly won’t be a boring show. On that basis alone, I’m going to agree with all the folks who’ve enjoyed watching this series on Crunchyroll and recommend picking up Durarara!! at the first opportunity.