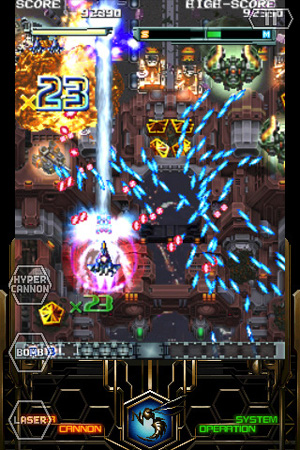 For years, famed 2D shooting game developer Cave had been content to leave its work in Japanese arcades. It was a minor tragedy that these kings of an unpopular genre had no desire to leave their native land, but there it was. You’d have to import a copy of a console port, if it existed: if not, well, you can make it to a Japanese arcade, right?

Thankfully Cave has reached out to its passionate foreign cult in recent years. In a surprising move (one which actually somewhat enraged the cult), Cave has even started to port its arcade shooters to the iPhone.

You’d expect that such heavy games as these—games that demand pixel precision as the player navigates through a deadly, screen-concealing haze of bullets—wouldn’t work out so well on the iPhone, which has typically had issues with traditional games designed for joysticks and directional pads. I’m glad to report that that isn’t the case here. Cave’s second iPhone release, Dodonpachi Resurrection, is superb: perhaps the highest-quality arcade-style shooting you’re going to find on the platform.

Resurrection (also commonly known as the Japanese title, Daifukkatsu, meaning pretty much the same thing) is the third title in the Dodonpachi series. The first game (we’ll leave out Donpachi for brevity’s sake), dating back to 1997, was one of the earliest examples of a “curtain-fire” shooting game. Beneath the waves of enemy fire hid a tremendously complex and challenging scoring system, full of tricks and secrets, that held the hardest of the hardcore rapt.

After the impossibly cruel sequel Daioujou, a game aimed at the hardest of the hardest of the hardcore, Resurrection is an attempt to reclaim some of the accessibility Dodonpachi had in ‘97. It’s a much easier game than either of its predecessors while still maintaining its depth, its frenzied pace and the ability to bring both intense concentration and mortal fear out of the player. 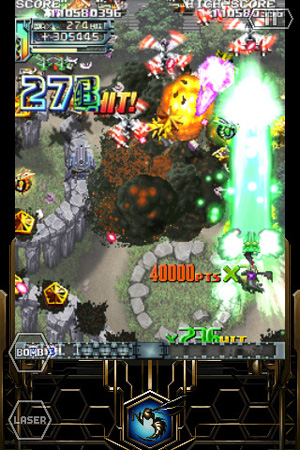 But how does it work out on the iPhone? Great, actually. If I could plug a joystick into the phone, I just might, but the touch controls are a perfectly playable alternative. You move your ship by sliding your finger across the screen, and firing is automatic by default. “Buttons“ on either side of the screen handle specific actions like bombs or going into Hyper Mode. The touch control is extremely, surprisingly responsive, easily accommodating both screen-sweeping movements and the tiny, subtle twitches needed to navigate through the deadly blue-and-pink rain with which you will soon become so familiar.

After an initial, clumsy learning period—the kind any new control method will bring about—I found myself taking down the first loop of the arcade mode on the subway without needing to continue (gaining access to the game’s second loop requires a certain level of wizardry far beyond my abilities). Now I’m hooked and taking aim at a high score. This game isn’t just playable on the phone, you can play it well. Leaderboards and achievements are provided via OpenFeint, so you can show people exactly how well you’re playing.

Cave is known for attention to detail in their work, including their in-house ports, and they don’t skimp just because this is a game for a phone. They’ve clearly thought long and hard about the issues of transplanting touch controls onto a game like this: options exist to change the placement of the buttons (left and right-handed configurations, as well as setups with buttons on both sides of the screen) and the size of the screen. The latter is an unavoidable trade-off: if you play with the game covering most of the screen, it’s inevitable that your thumb will end up covering the ship and some of the action. On the other hand, this is already a small screen to begin with, and on the small screen mode you could find yourself squinting. I had no problem seeing things in any of the three screen modes, but your eyes may vary.

In addition to the substantial arcade mode, with its three playable ships and three very different modes of play, Cave has prepared a bonus iPhone mode specifically for the platform. This abandons the dense scoring rules of the arcade version for its own system driven by the S and M meters (they’re Slaughter and Menace, okay?). To boil it down to 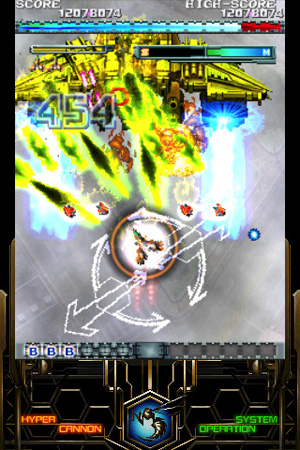 essentials, you get point multipliers for “grazing” bullets (sticking as close to them as you can without actually being hit) and cash out for big points with the Hyper Cannon, which is charged by spinning your finger on the screen. Gimmicky? Yes! Satisfying? Also yes!

There’s also a completely new (and rather esoteric) soundtrack for iPhone mode in addition to the existing soundtrack. This is definitely a game to play with your headphones on, in either mode.

All told, we’ve got a ton of value in a $10 package here and very possibly the finest arcade shooter available for the platform, rivaled only by Cave’s own Espgaluda II. A parade of tanks, copters, bullets, and gigantic, vicious mechanical schoolgirls awaits, so get on it now!

Note: On account of all those bullets, Dodonpachi Resurrection will only run on an iPhone 3GS or above.