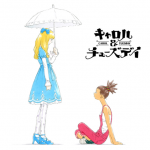 Cowboy Bebop and Samurai Champloo‘s Shinichiro Watanabe is directing a new original anime at studio BONES, which he previously worked with on Space Dandy. Carol & Tuesday will debut as part of Fuji TV’s recently-revealed Plus Ultra anime block in April 2019.

Here’s how the story is described:

The two met and created a song. No one knew what a miracle it would bring.